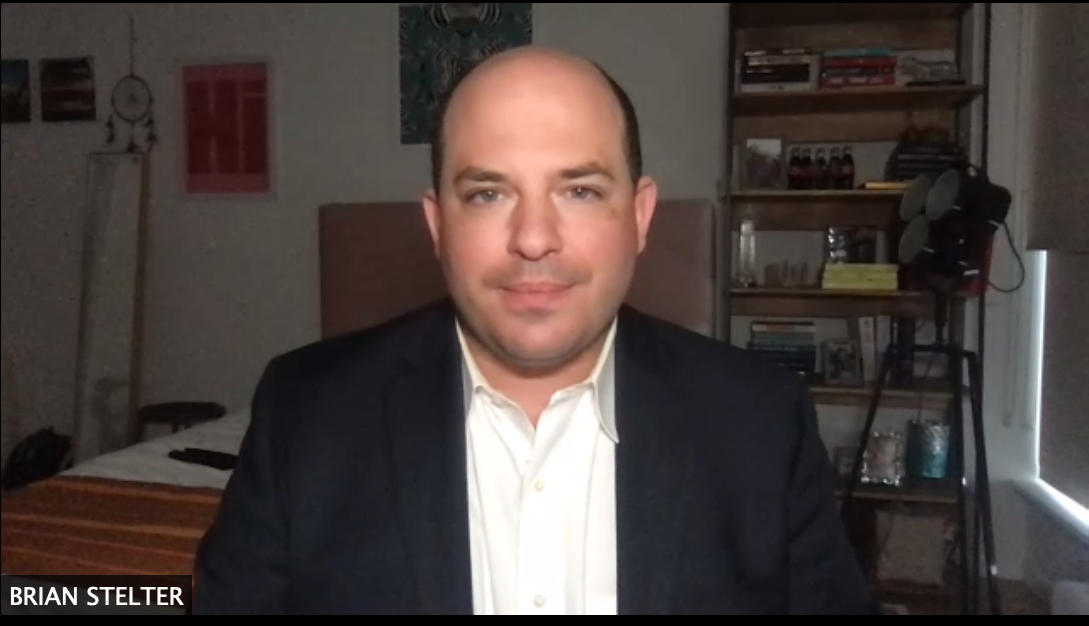 Fox could cause ‘enormous damage’ on election night, Stelter warns

How Fox News reports the upcoming U.S. election will be crucial in how the result is accepted, CNN’s Brian Stelter said in an FCC webinar.

Brian Stelter is interviewed by Eric Wishart on September 8, 2020.

Election night coverage on America’s most watched cable network could be a ‘tug of war’ between its opinion side – anchors like Sean Hannity and Tucker Carlson – and its ‘well-respected decision desk’ that analyses the data and calls races, said Stelter, who hosts CNN’s Reliable Sources.

“Fox has a huge responsibility in the hours after election night, assuming there’s not a winner right away,” he said. “Will this be a house divided, where the news side is saying that votes are still being counted, and Trump’s side is saying ‘Trump won, Trump won, shut it down, stop the counting, Trump won’?

“Will we be in this situation where there are two contradictory, confusing messages coming from the two sides of the house?”

He added that America ‘by and large accepts the result as television networks announce it’ and said if Sean Hannity and ‘those guys at Fox on the opinion side decided to contest the result or go along with whatever Trump is tweeting, it’s going to do enormous damage’.

Stelter reiterated that the Murdoch family, headed by media mogul Rupert, and the head of Fox News have a ‘huge responsibility’ around the channel’s reporting of the election, ‘and I hope they live up to it’.

Stelter’s latest book, Hoax: Donald Trump, Fox News and the Dangerous Distortion of the Truth, goes behind the scenes to examines the relationship between the president and the news channel, talking to current and former Fox insiders about President Trump’s ‘obsession’ with the network.

He pointed out that Trump was being fed misinformation by Fox News that he would then publicly reference as fact. This, Stelter said, led him to use ‘hoax’ in the book title rather than Trump’s previously favoured ‘fake news’, particularly after the president and Fox News both played down the outbreak of COVID-19 by using the term.

“I think the book is doing well because this is the part of the Trump story that still is not fully understood, which is his addiction to Fox News. I would argue that it’s a uniquely American problem to have a president so obsessed with a television channel,” he said.

The tug of war between the news side and opinion side meant that instead of reporting the news, Fox talks about the news. Other networks, he said, were ’tethered to the truth’ by vigorous vetting and standards processes prior to a segment airing.

Asked if CNN’s criticism of Trump by anchors such as Chris Cuomo and Don Lemon made it just as partisan as Fox, he said: “If Joe Biden comes into office and says that it’s sunny at his inauguration when it’s raining – and that really happened, Trump lied about the weather on day one – we will fact check him to the ends of the earth. I actually think the coverage would be harsher.”

Being ‘centre of the pro-Trump universe’, Fox News and its anchors wielded huge influence in America, Stelter said. Sean Hannity, a former mentor to Stelter who came to prominence at the channel following the resignation of disgraced Fox News mastermind, Roger Ailes, had become ‘an adviser to the president, a confidante, a friend to the president’.

The extreme relationship between president and news network was emphasised by Stelter when he revealed that Trump had kept Chinese President Xi Jinping waiting so he could speak to Hannity.

“He really did keep the Chinese president waiting… It does speak to the power dynamic here. Trump is prioritising Hannity… he has to wait his turn to call into Hannity’s show. He’ll still do a 20-minute rant first and then have the president come on the show. It speaks to the power imbalance here and I think when we look back at the Trump years… we will say this addiction to television, this reliance on Fox, hurt the Trump presidency,” Stelter said.

Writing in his book about Ailes, who resigned in 2016 as Fox chairman and CEO amid allegations of sexual misconduct, Stelter said he was still missed at the network because he ‘was tough on Trump sometimes, he knew how to reign Trump in when necessary’.

“One popular view on Fox is that if Ailes were in charge there’d be a strong leader, at least someone would be firmly in charge and would have tried to control Trump in a way that no one at Fox does today,” Stelter said.