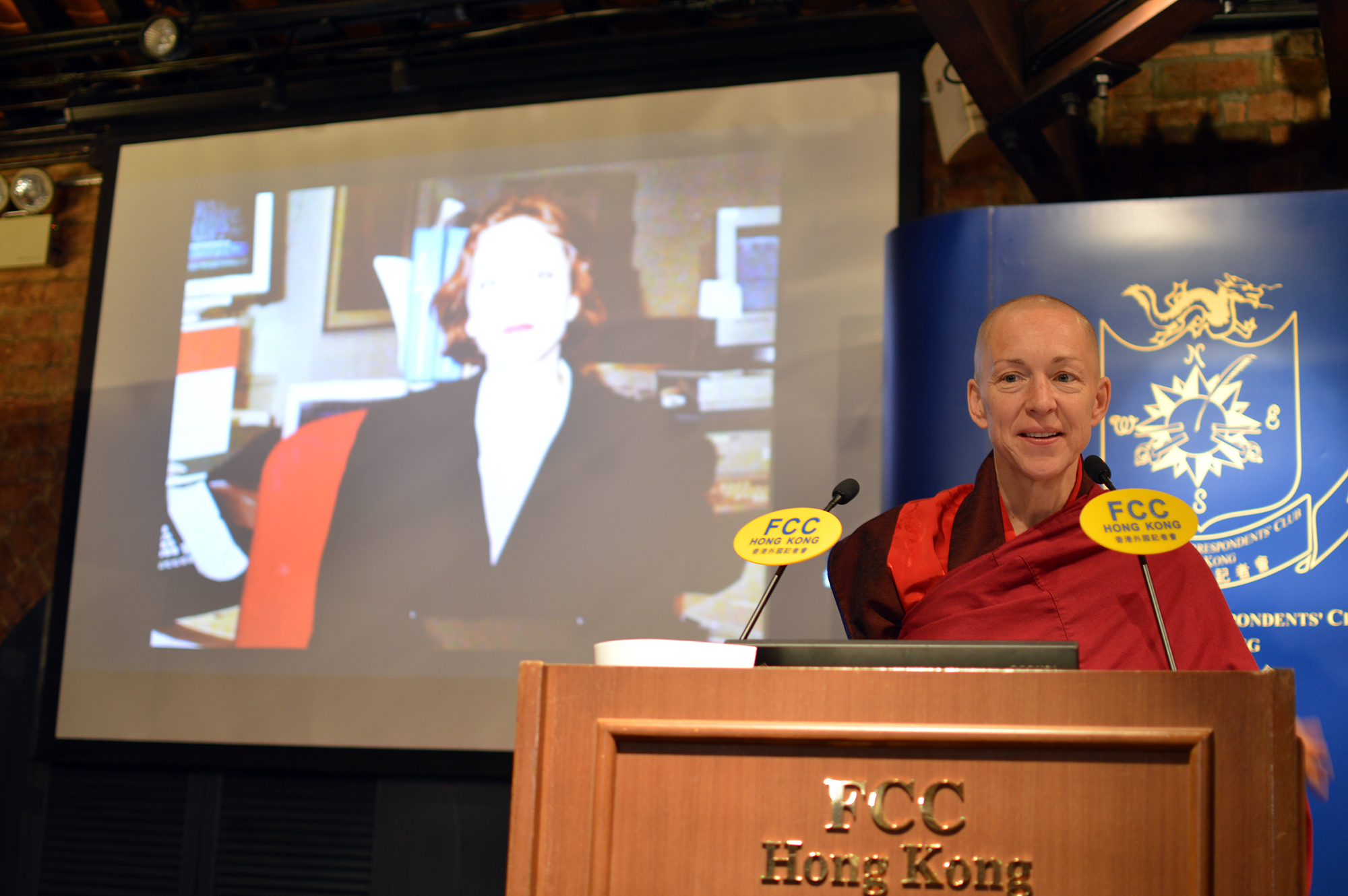 From Banker to Buddhist Nun: Emma Slade on her journey to enlightenment

A former high-flying banker who became a Buddhist nun after being held hostage spoke of her journey to a life dedicated to helping those less fortunate.

Emma Slade, standing in front of a photo from her days as a high-flying banker, told FCC members about her journey to becoming a Buddhist nun. Photo: Sarah Graham/FCC

Emma Slade was a Cambridge Graduate and international banker – based in New York, London and Hong Kong –  when, during the height of the Asian debt crisis, she was taken hostage while on business in Jakarta.

The terrifying experience of being trapped “in a room with a man with a gun” was traumatic, leaving Ms Slade feeling a “complete loss of control over my life and my body”. After returning to her banking job, Ms Slade suffered flashbacks of her ordeal and to cope she immersed herself in yoga. This was her first step towards Buddhism and a journey on a path that led her to Bhutan where she was granted permission to study to become a Buddhist Nun.

After more than three years of practicing Buddhism with her Lama, she became the only Western woman to be ordained in Bhutan. She then founded a charity – Opening Your Heart To Bhutan – to help disadvantaged children, and has written a book of her life story, Set Free: A Life-Changing Journey from Banking to Buddhism in Bhutan. All proceeds from the sale of the book will go to the charity.

When asked by a guest about the commitment of becoming a Buddhist nun, including taking a vow of celibacy, Ms Slade said: “Individual desire is not really part of a nun’s existence. You’re dedicating your life to others absolutely 100%.” She added that she had felt a “ravenous hunger” for spirituality and said there was “absolutely nothing I miss” about her former high-flying life. “For me, I have gained so much and lost nothing,” she said.

Ms Slade joked about taking a vow of celibacy, saying: “My mum… is quite a character… one of her friends said ‘Celibacy? You’re very young to be celibate’. And my mum said ‘You know, this is much better because she was useless with her boyfriends’.”

Earlier this year, Ms Slade’s work in Bhutan was recognised in her native United Kingdom with the Point of Hope Award, presented to her by Prime Minister Theresa May.

Ms Slade talked of her hopes that mental wellbeing will increasingly take centre stage as an inspiring and important subject and believes the tools – or Buddhist principals – of mindfulness, compassion and renunciation can play an important role in mental wellbeing and freedom.