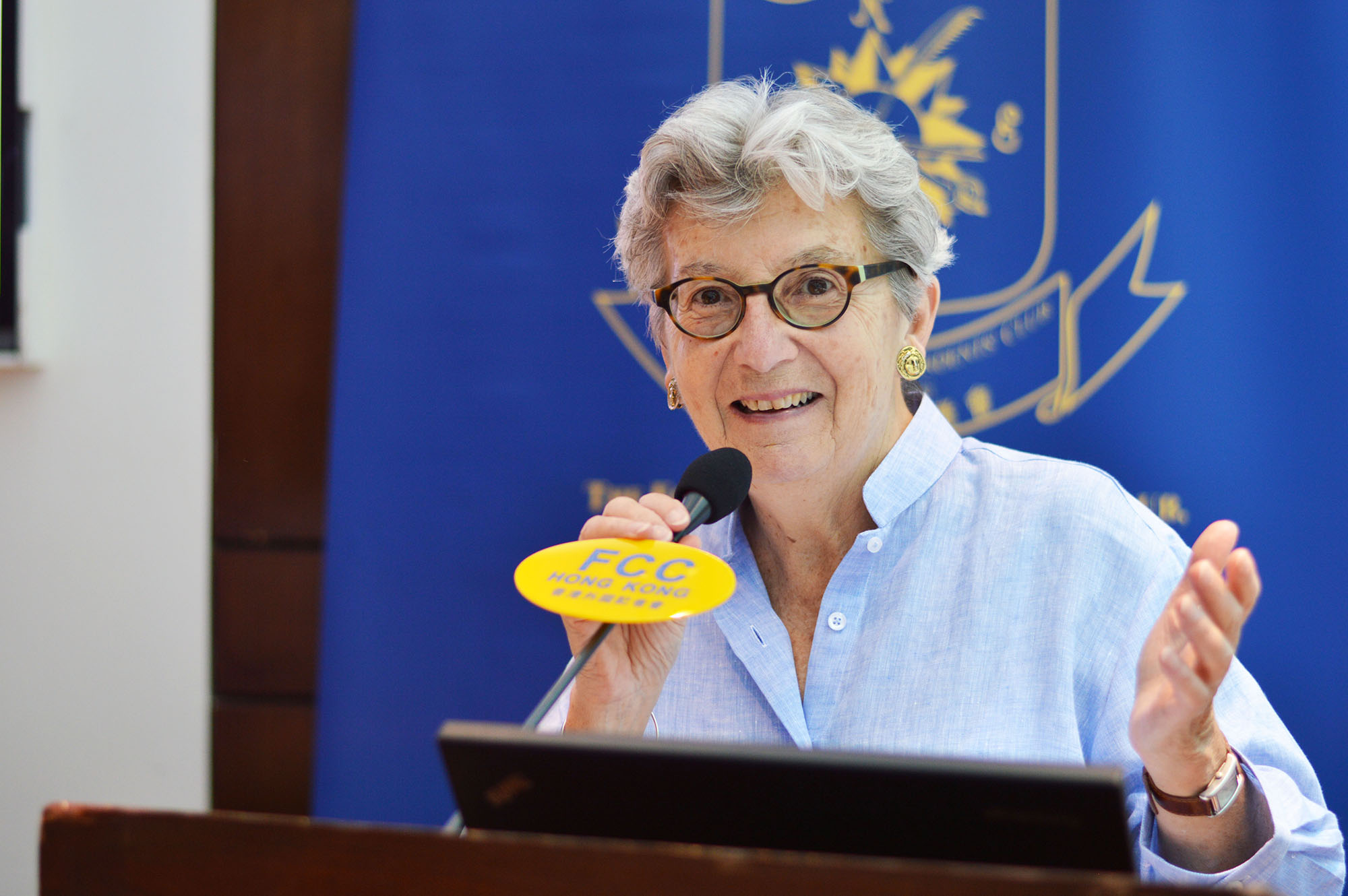 From Coral Reefs to Carbon Markets: Paula DiPerna on her life’s journey

The journey from journalist to film producer to environmental crusader was the subject of a talk by Paula DiPerna, who spoke (through an intermediary) about working with legendary filmmaker and ocean explorer, Jacques Cousteau.

Unfortunately, DiPerna, a visiting fellow of the Civic Exchange who has been in Hong Kong for eight weeks giving talks, had lost her voice by the time she arrived for her April 25 club lunch appearance. Joyce Lau, the Civic Exchange’s Communications Director, stepped in to read out her speech and DiPerna managed to whisper answers to questions from guests.

The documentary maker’s story began as a New York high school teacher with a burning passion to write stemming from an “early fascination with books and the stories my mother would make up and tell me when I was little”. An opportunity to indulge her yearning came when the city, facing bankruptcy, decided to axe the schools budget, “including letting go the teachers with least seniority, meaning me and my peers”.

“I found that so short-sighted and detrimental to the city’s welfare, and was burning to tell the story,” DiPerna said.

And write about it she did, albeit a first attempt described by Village Voice editor Ross Wetzsteon as “too boring… a perfect example of an interesting story that turns boring on the page”.

Despite her underwhelming start in journalism, DiPerna kept writing and eventually took a role as a volunteer editor on a book called The Cousteau Almanac. “I volunteered, thinking it would be a good way to learn about ocean science although at that time I had no interest in the environment per se,” she said.

But an interest in the environment did develop through her close working relationship with Cousteau himself, whose pioneering TV series The Undersea World of Jacques Cousteau was watched by millions, and who co-invented the the breathe-on-demand valve for SCUBA diving. Her work with Cousteau took her into film production and narration, and together they traveled the world to highlight environmental issues.

“Cousteau was so famous he could secure a meeting with anyone, and we worked closely with Heads of State and just about anyone he wanted to meet wanted to meet him.  So we had fantastic access to the top and I began also to see how big decisions get made – quickly very often,” she said. “Although to avoid inertia, implementation is key and that was my key role for Cousteau on the policy side. To implement the big ideas he was launching to this or that high level person.”

During the talk, DiPerna showed photos of her expeditions with Cousteau to Antarctica and Alaska, among other far-flung places. But perhaps one of their most important trips was to Cuba, where they helped secure the release of 50 political prisoners being held under the Castro regime.

“Suffice it to say here that no three people were ever less destined to meet than me, Jacques Cousteau and Fidel Castro, and yet not only did we meet, we got along well enough to develop a trust that enabled Castro to release these prisoners as a token of his respect for Cousteau, and for me to able to work with the US government – when we had no official diplomatic relations – to get entry visas for the prisoners – all men,” DiPerna said.

Having developed the Chicago Climate Exchange (CCX), the first integrated cap-and-trade system in the world that handled all six greenhouse gases; and subsequently the Tianjin Climate Exchange, the first of China’s seven pilot carbon markets; DiPerna now spends her time promoting the concept of making pollution more expensive than not polluting.

“So now, today, I try to pull all the threads of my life together wherever and however I can, giving talks (too many I guess given the state of my voice) and writing and affixing myself to strategic organisations such as CDP and Civic Exchange,” she said.