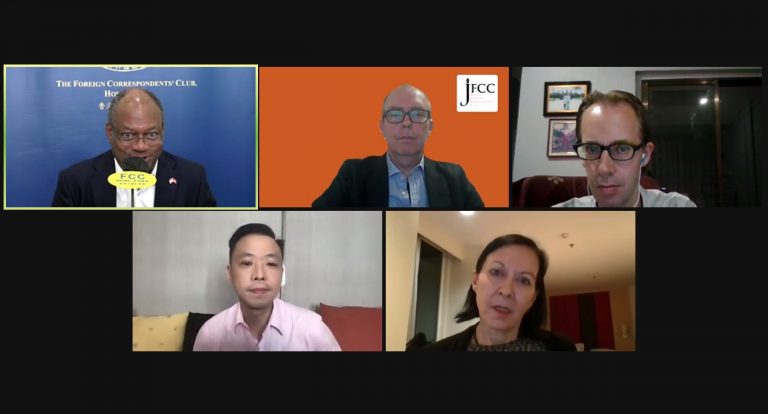 On World Press Freedom Day, an FCC Hong Kong panel of speakers representing press clubs across Southeast Asia painted a dire portrait of press freedom in the region as various governments have vilified, attacked and even arrested journalists throughout the COVID-19 pandemic.

Over the past year, the panelists said, a series of developments including the passage or threat of “fake news” laws, new visa restrictions, online harassment, physical violence and other forms of intimidation have led to a growing atmosphere of fear and self-censorship for reporters, particularly in Myanmar.

“Myanmar has hit a new low, and it’s been a very sobering spectacle for all of us in the region,” said Gwen Robinson, former president of the Foreign Correspondents’ Club of Thailand. “Journalists are basically in hiding and fearing for their lives.”

Barnaby Lo, speaking on behalf of the Foreign Correspondents Association of the Philippines, described a similarly treacherous environment for Filipino journalists, who are treated as enemies by President Rodrigo Duterte. He noted that a total of 170 journalists have been killed in the Philippines since democracy was restored in 1986, including 19 of them during Duterte’s presidency.

“While Filipinos do appreciate the support for Maria Ressa, I think a lot more journalists here in the Philippines need that kind of international support as well,” Lo said.

Ed Davies, president of the Jakarta Foreign Correspondents Club, said that Indonesia’s Electronic Information and Transactions law has been a cause for concern and has drawn criticism for its broad interpretation.

Similarly, Ate Hoekstra, president of the Overseas Press Club of Cambodia, said the government there regularly speaks out against “fake news” and is working on a new cybercrime law, which journalists fear may be broad enough to curtail press freedom.

Speaking on the situation in Hong Kong including troubling developments at RTHK and the prosecution of journalist Bao Choy, FCC President Keith Richburg said, “I would summarise it by saying we’re suffering death by a thousand cuts, nothing major but so many small things.”

In spite of the difficult environment in Southeast Asia, the panelists did highlight some positive developments from the past year, including the increased role of amateur journalists and eyewitness media.

“It’s raised the bar for conventional media,” said Robinson. “The images are out there, it forces you to go further.”

She also said the pandemic and the coup in Myanmar had changed the media landscape.

“There’s a lot that is positive that’s come out throughout the region in the new creativity in the ways journalists are pushing back, finding very resourceful ways to get news out, the way they’re operating,” Robinson said.

“People are starting to go back to SMS, old-fashioned text messages. We thought the era of transistors was dead, but actually I wouldn’t be surprised if soon you see a proliferation of transistor radios in Myanmar.”