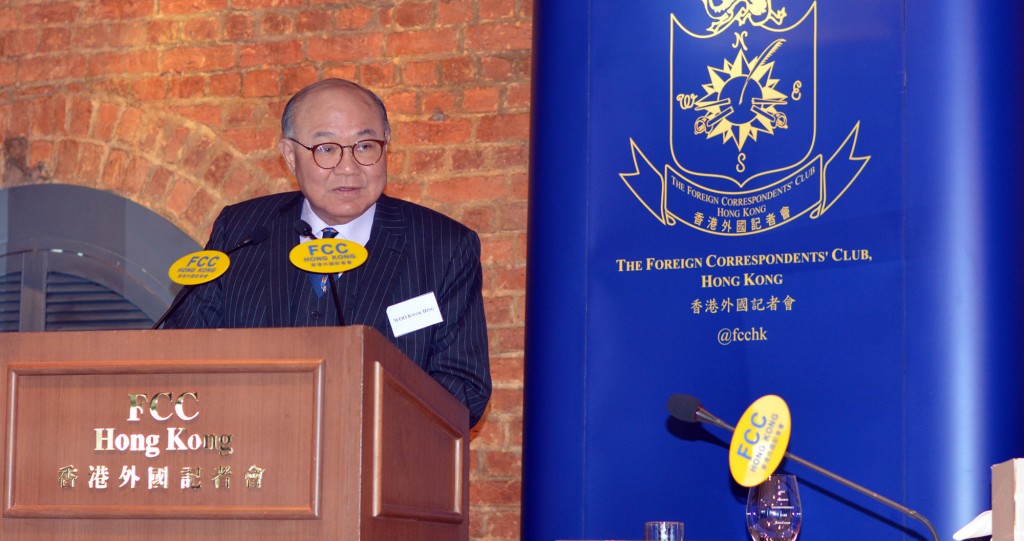 In what was described by FCC journalist correspondent Cliff Buddle as an ‘ambitious’ manifesto, Woo Kwok-Hing set out his vision for a city which he said was broken by years of mismanagement at the hands of previous – and current – leaders.

Addressing a club lunch on January 24 that was packed with press, Woo Kwok-Hing began by lampooning his rival bidders for Hong Kong’s top job.

“Originally I was seeking to unseat the incumbent,” he said of his early announcement to stand, “but he suddenly changed his mind. For Hong Kong, Christmas came early on December 9.”

The outspoken judge also took aim at Carrie Lam, joking that she was ‘apparently learning to live like the rest of us’ in trying to master the use of an Octopus travel card, in reference to her appearing unfamiliar with how to use the card as she took the MTR to visit Ap Lei Chau recently.

However, Woo Kwok-Hing said he represented change for Hong Kong, declaring that as chief executive he would give every Hongkonger the opportunity to vote for their next leader by 2022.

“I have 20:22 vision,” he said, “because I am only aiming to be a one-term chief executive. I hope that the next chief executive will be elected by one man, one vote – universal suffrage.”

On hearing this, the gathered audience applauded.

He said his plan was to increase the number of voters in the nominating committee – currently 1,200 members who would choose form several candidates vetted by Beijing – initially to 250,000 voters, then to 1 million by 2022. This would eventually be expanded to 3 million plus voters to include all Hongkongers eligible to vote.

Among other pledges in Woo Kwok-Hing’s manifesto were:

Woo Kwok-Hing, when asked whether he would drop charges against the four pan-democratic legislative members involved in last year’s oath-taking saga, said as chief executive he wouldn’t have brought the charges in the first place.