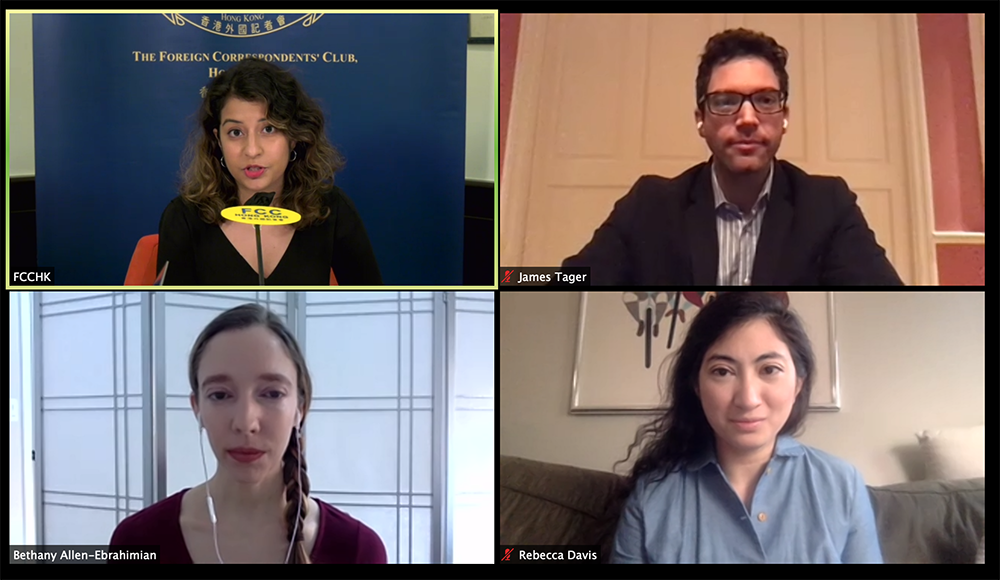 China’s Communist Party has ‘weaponised’ the greed of America’s film industry, resulting in increasing self-censorship by Hollywood in its bid to reach Chinese audiences.

That was the consensus of a panel of experts discussing China’s influence over Hollywood during a webinar on October 5.

James Tager, Bethany Allen-Ebrahimian and Rebecca Davis were appearing just weeks after the release of Disney’s Mulan, a big-budget Hollywood retelling of the Chinese folklore, The Ballad of Mulan, which flopped at the Chinese Box Office. The movie, the most expensive ever directed by a female, was beset by controversy surrounding director, Niki Caro’s choice to film in Xinjiang. The region is home to Uighur Muslims who are oppressed the Chinese government, which has been accused of detaining hundreds of thousands in mass internment camps in what Allen-Ebrahimian described as “cultural and demographic genocide”. In the film’s credits, Disney thanks several government departments of Xinjiang, prompting an international backlash against the movie.

“It was just shocking”, said Allen-Ebrahimian, China reporter at Axios. “It would have been bad no matter what but it landed in the midst of this controversy which is basically more or less about how powerful rich Americans and a powerful American corporation have sold out any semblance of values to the Chinese Communist Party.”

She speculated that either Disney had been “asked to put it in there to make Xinjiang look better and whitewash Xinjiang”, or that “whoever was in charge of this was so removed from all these debates and issues about human rights in China that they didn’t even realise what it would do”.

Either way, she said, Disney had failed to show “democratic morality”.

Tager, deputy director of free expression research and policy at PEN America, discussed the organisation’s recent report on the topic. Titled Made in Hollywood, Censored in Beijing, it revealed how Hollywood’s most influential professionals are increasingly making decisions about their films in an effort to avoid antagonising Chinese officials who control whether their films gain access to the world’s second largest movie market.

He gave 2013’s Brad Pitt movie, World War Z, as an example of how Hollywood was pandering to Beijing’s desire to promote narratives of which it approves. In the original novel by Max Brooks, the virus that led to the zombie outbreak originated in China. Yet in the film, that storyline was dropped.

“Chinese regulators offer a carrot and stick to Hollywood studios determining their stance on cooperation with Chinese governmental censorship. The carrot is ‘well if we really like your movie we can offer better release dates, we can offer more preferential marketing buys… essentially we can create a more  favourable regulatory climate for your movie to succeed. We can remove barriers out of your way’. And the stick of course is ‘ultimately if we don’t like your movie we won’t show it within China’. They (CCP) are the sole gatekeeper to what is becoming the most important Box Office in the world.“

Only 34 foreign films per year are permitted for release in China, and the four big studios – Disney (which now owns 20th Century Fox), Paramount Pictures, Warner Bros., and Metro-Goldwyn-Mayer – dominate those slots. Scripts are checked by the Chinese government before permission is granted to shoot in the country. The origins of China’s censorship, said Allen-Ebrahimian, stem from the first Cold War and Hollywood’s subsequent depictions of Russians as ‘evil’ and ‘incompetent’, Allen-Ebrahimian said.

Tager and Davis agreed that Hollywood had come a long way in recent years in terms of diverse representation, with an increasing number of Asian and Asian American actors winning top roles.

Davis, China bureau chief for Variety, said that while Hollywood would continue in its bid to appeal to Asian audiences, there would be no Chinese/American co-productions in the near future.

She said a “total disengagement” and cinematic “decoupling” from China on Hollywood’s part would be “a tragedy” and that “we should still keep trying”.