News News In the Era of Cancel Cultur... 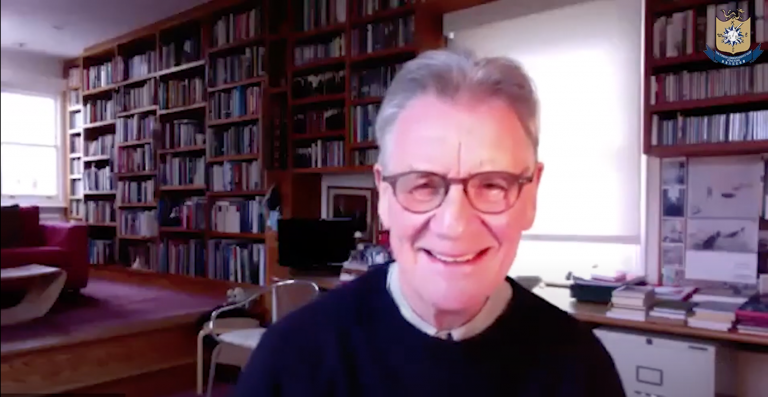 In the Era of Cancel Culture, Michael Palin Defends the Role of Comedy

An accomplished actor, writer and traveller, Monty Python star Michael Palin issued a full-throated defence of comedy’s importance as a form of free speech during a Zoom event moderated by club president Jodi Schneider at the FCC.

Asked if there should be any red lines for comedy in the era of “political correctness” and so-called cancel culture, Palin said, “Comedy should be free, it’s an exercise in free speech.”

One of the founding members of legendary comedy troupe Monty Python, Palin added: “It’s almost more important than anything else, comedy, because it allows you, by doing something which is not directly commenting on what’s happening, to make a point in a way which is much more effective than sometimes going head on. I think comedy is perhaps sometimes the best way to say the hardest things.”

Arguing that humour is a way to bring people together, Palin praised it as a balm for the absurdity of life. “Comedy is about the human condition, the human situation, the way we all are,” he said. “If we’re going to take ourselves so seriously that we can’t be laughed at, then I think we’re in real trouble.”

Palin is familiar with the intersection between comedy and controversy. Though the work of Monty Python has been largely celebrated, he recalled that the group received widespread negative feedback on Life of Brian, a 1979 film set in Biblical times that was banned in several countries for being blasphemous. “There were people saying this is just cheap jokes at the expense of people who have religious sensibilities, which it wasn’t at all,” said Palin.

Regardless, Monty Python’s television series and films have remained popular over time, in spite of being produced decades ago. Asked why he thought their work had such an enduring legacy, Palin said, “For a start, Python was never topical. It went really for the absurdity of life, particularly the pretentiousness of human behavior. That hasn’t really changed. I think that’s why Python’s looking at the world and seeing it as a very, very silly place strikes a real chord with the younger generations.”

Between Monty Python’s four series and his later travel programmes, Palin has worked extensively with the BBC, and he acknowledged the critical role the public broadcaster played in launching his career. “I don’t think we would have done Python without the BBC, I don’t think anyone else would have put it on,” said Palin. “At the time, of course, the BBC was all-powerful. There were very few other channels, so the BBC could take risks and take gambles, which it did really with Python.”

Today, however, Palin said things are very different at the BBC, with increased supervision and oversight of programming. After Monty Python was given the green light, “we were left to get on with it, and that just would not happen now,” he said. Nonetheless, he stated that “the BBC is extremely important and does extremely good work,” adding that there are vested interests that don’t want the broadcaster to succeed and constantly pose a threat to its future success.

Palin also acknowledged the role that American broadcaster PBS played in Monty Python’s success, as it began airing episodes in 1974. “We’d all given up hope of it ever going across to the States, and it really caught on amongst the students at various colleges and universities,” said Palin. “They really gave Python a new lease of life.”

Also known as the globetrotting author of several travelogues and the star of numerous travel programmes, Palin has surprisingly enjoyed being stuck in one place over the past year due to recovery from heart surgery and the coronavirus pandemic. “I’ve been quite content with actually doing very little,” he said, adding that he plans to take the vaccine once it’s available.

As for future travel plans, Palin said that Africa and Mongolia are at the top of his list. When asked if he would take a commercial trip into space courtesy of Richard Branson or Elon Musk, he replied: “Absolutely not.”