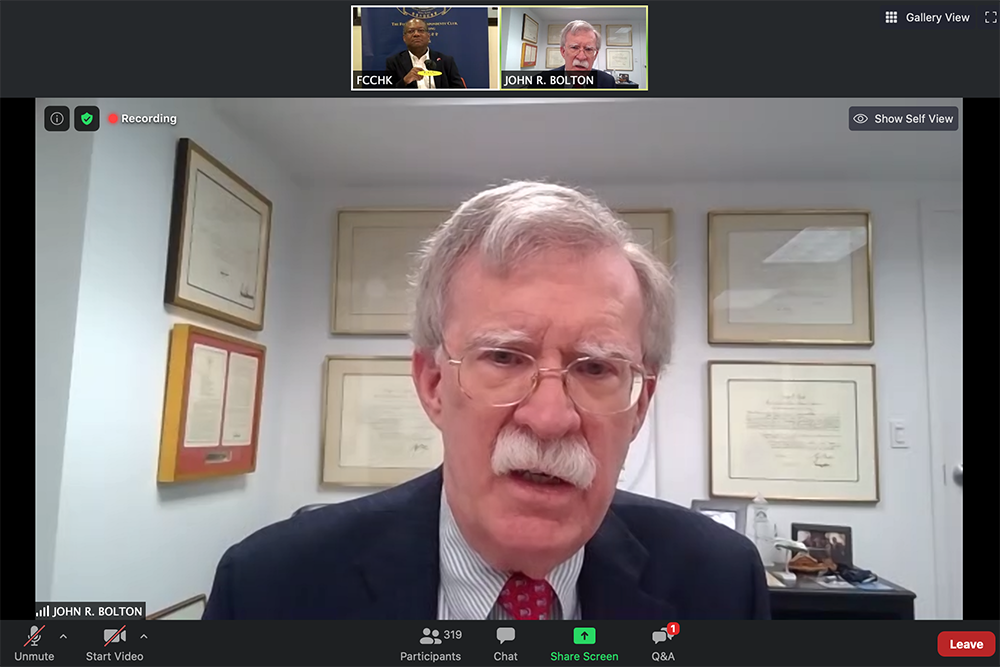 US still supports Hong Kong, should open door to its people: Bolton

Former U.S. National Security Advisor John Bolton told an FCC webinar that Hong Kong still enjoys broad support in the United States even as the city’s freedoms are being eroded, and that the Trump administration should follow the lead of other Western countries and open the doors to Hongkongers wishing to leave, writes Keith Richburg.

Bolton spoke the day after President Donald Trump signed an executive order ending Hong Kong’s preferential trade treatment, and a sanctions bill aimed at individuals and banks, leading some analysts to suggest Washington and Beijing were headed for a “decoupling” of their relationship if not a new Cold War.

Bolton said decoupling is “not only possible, but is happening,” although he said the likelihood of a military conflict remained remote.

Calling the new China-imposed national security law “deplorable,” Bolton said: “It must be very discouraging for the people in Hong Kong. They fought so long. They thought they had another 25-plus years before this.”

“Don’t think that anybody’s giving up on you,” Bolton added: “I favour greatly immigration and I think what Britain, Canada and others have done in terms of potential political asylum for Hong Kong is something the United States should do, too, so I favour more immigration.”

Bolton, who left the Trump administration in September 2019, described its China policy as “incoherent” and “utterly without strategy”.

While Trump understood the Hong Kong protests of 2019 to be “significant in size,” he was “resolute in not wanting to do anything about it or to get involved in it”, fearing it might disrupt prospects for a trade deal.

The July 15 discussion between Bolton and FCC board of governors member Keith Richburg focused largely on U.S. relations, which have become increasingly strained over trade, territorial disputes in the South China Sea, and the coronavirus pandemic.

Bolton also touched on Republican Party politics, saying he would not vote for either Trump or former vice-president Joe Biden, the presumptive Democratic nominee, in November, instead choosing to write in a conservative candidate.  Bolton said he wants to spend time after the election working to rebuild the Republican Party for the post-Trump era.

His recent book, The Room Where It Happened: A White House Memoir, details his 453 days in the Trump Administration.