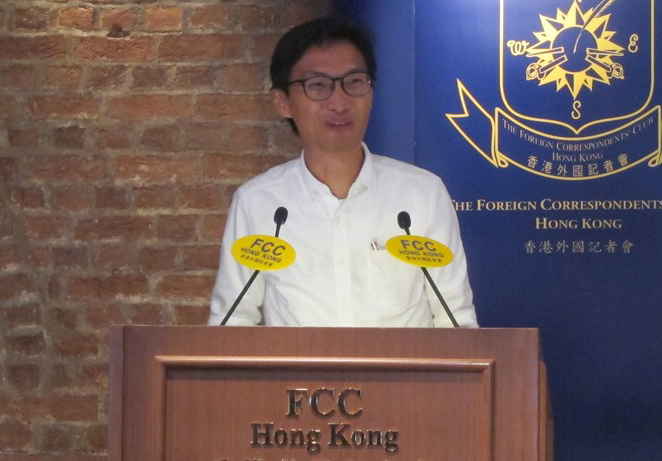 Newly-elected lawmaker Eddie Chu gave his first ever speech in English to the FCC.

Eddie Chu, the newly-elected lawmaker who gained the largest number of votes of all of Hong Kong’s constituencies in the recent elections, spoke of his hope to achieve a majority of seats for ‘self-determination’ candidates at Legco in the next four to eight years.

Fielding some tough questions from members of the international press who had attended an October 11 luncheon at the Foreign Correspondents’ Club of Hong Kong where he was guest speaker, ‘king of votes’ Chu said the only way for the city’s residents to have real bargaining power with Beijing over potential changes to the Basic Law would be to have the majority on the Legislative Council.

Chu, who is fighting for democratic self-determination for the people of Hong Kong, told the audience that he felt obliged to step in and fill the ‘big hole’ that the Pan Democrats, whom he described as ‘falling apart’, had left in Legco. He said he wanted to build a bigger political network to fight China’s Communist Party that will forge more connections with pro-democracy groups in Taiwan, mainland China and Thailand, where activist Joshua Wong was recently denied entry.

The incoming politician, who spoke the day before he was due to take his oath, was asked by BBC reporter Andrew Wood what he would actually do with that self determination if he did manage to achieve a majority in Legco.

“Our situation is pretty much like Taiwan, so we have pro-unification and pro-independence. Within the camp of the Pan Democrats and also self-determination we have in our platform political ideas about autonomy, preservation of the environment and social welfare.”

However, he added that foreign press are generally more interested in the struggle for democracy rather than policies.