News News Leave so you can fight anot... 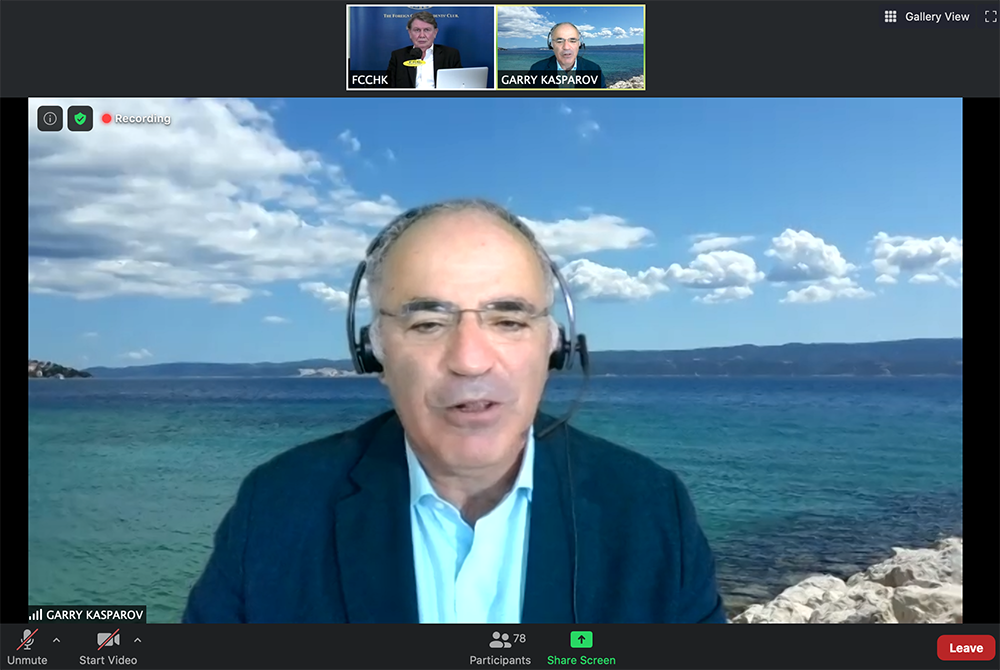 Speaking at an FCC webinar on August 27, Kasparov – himself exiled from his home country of Russia – said he hoped that a new wave of democracy movements around the world would make it safe for activists to return and rebuild Hong Kong.

Kasparov, who at the age of 22 became the world’s youngest ever chess champion, is a vocal human rights activist and was one of the first prominent Soviets to call for democratic reform. He was an early supporter of Boris Yeltsin’s push to break up the Soviet Union.

A fierce critic of Russian President Vladimir Putin, Kasparov left his home in Moscow to live in New York following a crackdown on dissidents in Russia.

He was speaking in a week that saw two Democratic Party lawmakers – Lam Cheuk-ting and Ted Hui – arrested in connection with last year’s pro-democracy demonstrations.

Kasparov, chairman of the Renew Democracy Initiative, said he hoped to see a “new wave of democracy movements” that would bring dictatorships to an end. This, he said, could herald a new era for Hong Kong.

When asked whether pro-democracy activists should seek exile, Kasparov said when he “recognised it would be jail or worse”, he left Russia.

He added: “The prominent people who believe they can play a role in rebuilding Hong Kong, I would say probably it’s a wise choice (to leave). China’s regime is not at the stage where they care about creating martyrs. You stay there, you fight, you’ll be in jail – you mentioned mainland China – maybe you will die.

“So I think it’s important that the core of this group is preserved because there will be a moment – maybe sooner than we think because as we can see in Belarus, these regimes are not stable and Putin now is experiencing great problems. Hopefully now … you see this the trend is going back to the eighties like a pendulum of history when we have a new wave of democracy movements around the world and when we’ll see these dictatorships are losing the momentum that unfortunately they gained on the geopolitical stage. Then I wish there will be enough people in Hong Kong to come back.”

Describing himself as “an incorrigible optimist by nature”, Kasparov said he believed “that China will also be free”.

Kasparov spoke about his desire to see President Donald Trump lose the November election. He discussed Trump’s close relationship with Putin – “please don’t call him president – he is what he is: a dictator” – comparing it to a KGB handler and his asset. He said he suspected that Trump’s connections to Russia “started much earlier than 2008/2009 when Russian money saved his crumbling empire from collapse”.

However, he was adamant that he would not visit Hong Kong in the future.

“I think that Hong Kong might not be on my travel list… I doubt very much in the foreseeable future I’ll be able to set my foot on Chinese soil or the soil controlled by the Chinese Communist Party,” he said.