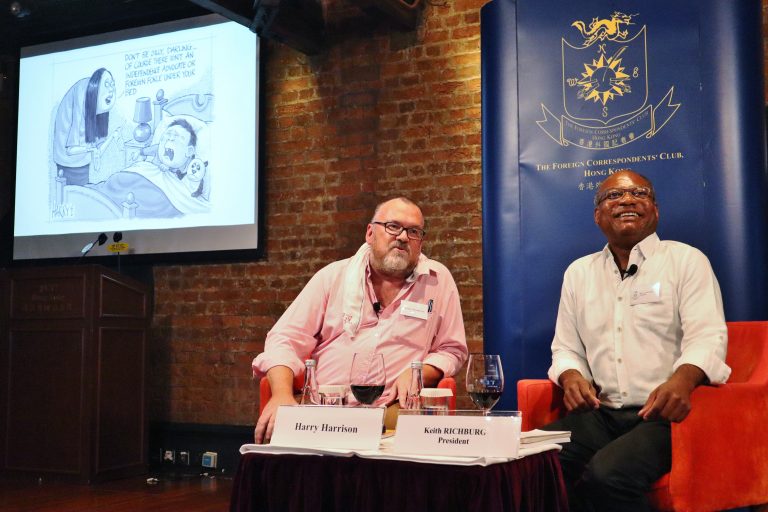 For over 20 years, award-winning political cartoonist Harry Harrison has put pen to paper satirizing Hong Kong life and politics for the South China Morning Post. Having recently released a new book, Add Ink: Cartoon Chronicles of Life in Hong Kong, Harrison appeared at the Foreign Correspondents’ Club to discuss his career and the process of drawing cartoons.

He explained that his creative process starts every day around 6pm, when he receives a list of news stories for the next day’s newspaper. He then drafts as many as ten cartoon ideas and sends them in for review.

“Every night, I think they hate the cartoons,” said Harrison.

He said that his sense of humor stemmed from being a child whose family moved around a lot, which meant that he often encountered bullies at new schools.

“I discovered humor, one-liners, would diffuse just about any situation and make you friends very quickly,” said Harrison.

FCC President Keith Richburg, who moderated the event, said that, in spite of all the negative developments for press freedom in Hong Kong, he felt that SCMP continuing to publish Harrison’s cartoons was a positive sign.

Harrison responded: “I’m continuing doing what I do assuming I’m treading the right side of whatever invisible red line there. As far as I know, that’s what’s happening and they know what my cartoons are about. Either that or I’m sitting on a powder keg.”