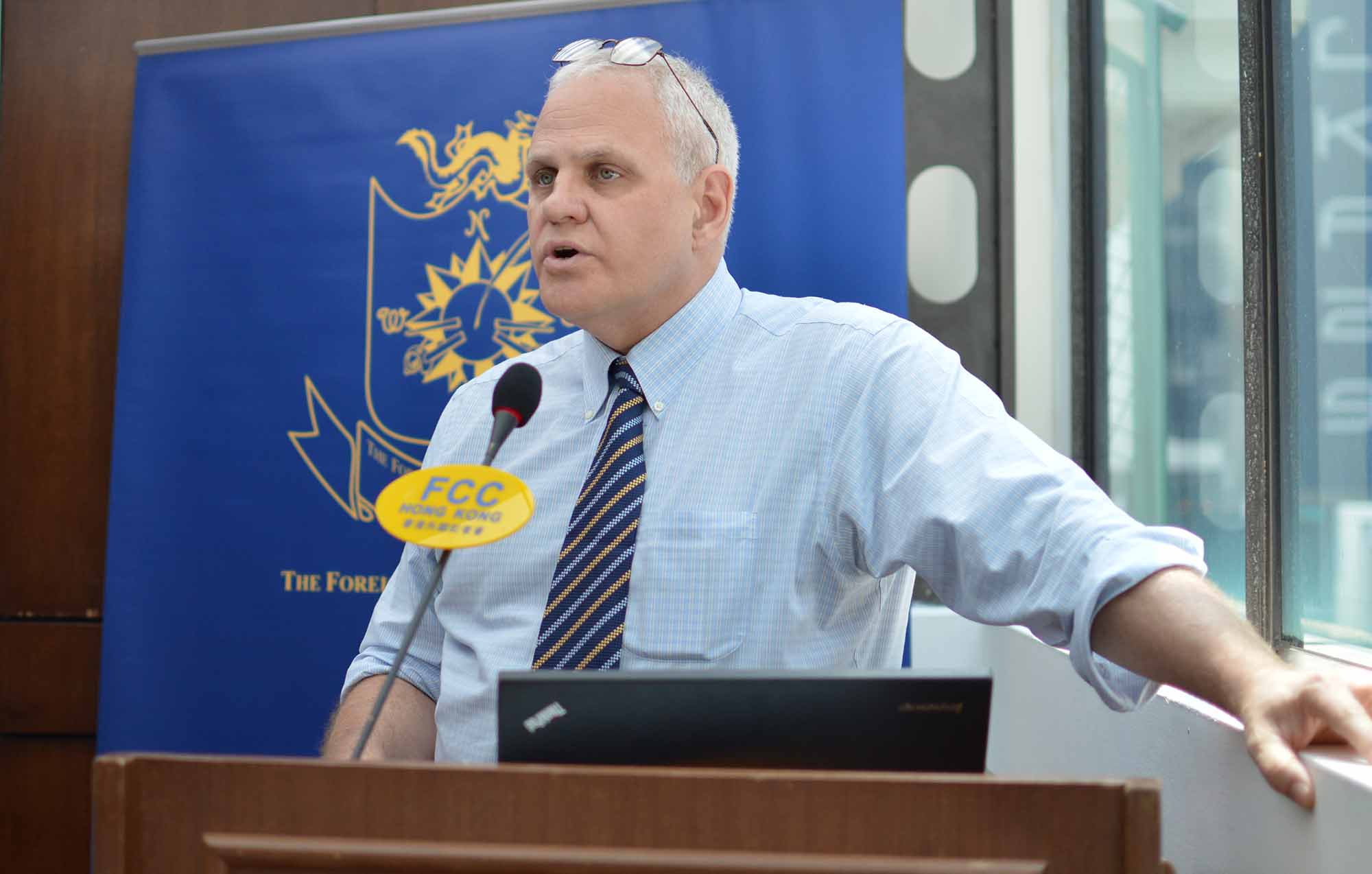 By the time you finish reading this sentence, a fellow human being somewhere in the world would have been forced into modern slavery.

Matt Friedman, CEO of The Mekong Club, recounted shocking stories from the victims of modern slavery when he spoke at the FCC. Photo: Sarah Graham/FCC

One every four seconds, 9.2 million new slaves every year, 45.8 million in the world today. In fact, there are more slaves today than at any time in history, said Matt Friedman, CEO of The Mekong Club, an NGO working to alleviate the problem through education.

One minute it might be a 13-year old girl who is forced to provide sex to up to 10 men a day, seven days a week; or a teenage boy who is placed on a slave boat in Thailand – working 18 hours a day for four years without proper food or rest, and without any pay at all; or a child who is separated from her family and forced to work in a sweatshop to make the clothes we wear or the electronics we use. Modern slavery comes in many forms, Friedman said, and it is a US$150 billion industry.

The definition of modern slavery is withholding wages; debt and other forms of bondage; retention of identity documents; restricted movement; physical and sexual violence. It often begins with an offer that is too good to be true: sometimes a work offer, or a marriage proposal, Friedman said. In Nepal, teenage girls are sold into a marriage and the young bride then trafficked into prostitution.

Currently there are 29,000 slaves in Hong Kong – half of those are women forced into prostitution; the other half are domestic helpers, he said. In a timely move, the Hong Kong government, which has remained silent over the issue, announced on March 21 it would launch an action plan to stamp out slavery in the city.

But what is being done globally to eradicate the problem? While legislation is being put in place, such as the UK’s Modern Slavery Act, it didn’t go far enough. Friedman, who interviewed hundreds of freed slaves throughout Southeast Asia for his new book, Where Were You? A Profile of Modern Slavery, gave statistics showing that 66,000 of the more than 40 million currently in slavery had been been helped – a mere 0.2%. And of the half million criminals operating within slavery, 7,000 we jailed – 0.8%.

The Mekong Club was established to unite and mobilise the private sector – namely finance, apparel, hospitality and retail – with the purpose of disrupting and ending modern slavery. Friedman, an international trafficking expert, said 75% of the 45.8 million slaves were in forced labour, and 60% of them associated with manufacturing supply chains. This is why it is important to engage the private sector. “The private sector has extensive human and financial resources that could help eliminate modern slavery conditions,” he said.

“I personally believe the private sector has great potential to be the silver bullet to address these types of issues,” Friedman said.

And The Mekong Club offers some interesting tools to companies in the private sector, designed to help them work more efficiently in addressing modern slavery. A Risk Assessment Matrix (RAM) is an online dashboard that helps brands to assess the risk of forced labour associated with specific products, in a given country or province, in order to prioritise their audits and investigations where modern slavery is more likely to exist within their supply chains.

A Knowledge Hub offers a comprehensive online resource centre on modern slavery. It archives news articles, reports, website addresses, blogs and more, with a focus on modern slavery’s links to the private sector. An End Slavery smartphone app encourages the public to earn care points through learning about slavery, spreading the word, and volunteering.

Its impressive Victim Identity App allows police and NGO workers to approach those they suspect of being slaves and communicate with them using country flags to identify the language they speak, and voice recordings in hundreds of different languages that can ask the victim questions, such as ‘are you being held against your will?’.

Acting on the startling results of a survey The Mekong Club carried out in Bangladesh that found 40% of those helped out of trafficking got retrafficked, Friedman said the NGO was working on vocational training with a work placement element to help victims start a new life.

But on a more personal scale, Friedman encouraged anyone who was touched by the sickening stories of those forced into slavery to take action, whether it be attending lectures, bringing the topic to the attention of their employers, or simply talking about it with others.