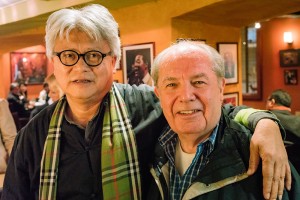 Chi passed peacefully early afternoon on Friday, March 8 after a particularly debilitating illness which robbed him of his considerable communicative powers.

Originally from Wuhan, he came to Hong Kong, as so many did, as a result of the Mainland Civil War.

His insightful novel, Diamond Hill, describes his early years and school days growing up with his family in a tough squatter settlement at a time when Hong Kong’s population was rapidly expanding.

A clever man, he was no isolated ‘bookworm’. He enjoyed sport and socialising, keenly and astutely observing the world around him.

Chi did his Medical Degree at the University of Hong Kong, moving to the USA to train as a pathologist initially in New York, then Philadelphia.

Chi married and had three children in the USA before returning to Hong Kong to work and settle.

He remarried in Hong Kong in 1997. His wife, Cathy Hillborn, loyal and loving, was with him daily throughout his last dark journey.

Not only was Chi a well-respected pathologist but in his later years became a prize-winning and best-selling novelist. His most recent work Three Wishes in Bardo, perhaps his best, takes us from Hong Kong to New York, California, Texas, back to New York and, ultimately, to Hong Kong. An adventurous, powerful and spiritual journey encapsulating the triumph of human qualities over malice and….. Tibetan Bardo – a state after death when the conscious mind actively persists on leaving the physical state.

Chi, a popular, elegant and witty friend. A fixture and feature at the Foreign Correspondents’ Club. It’s hard to believe we won’t see you and enjoy your company there anymore.

Profoundly missed by your loving wife, your sisters, children, and many friends.

At peace now, Chi – your muse at peace too.

Watch Dr Chi at the launch of his book, Hong Kong Noir