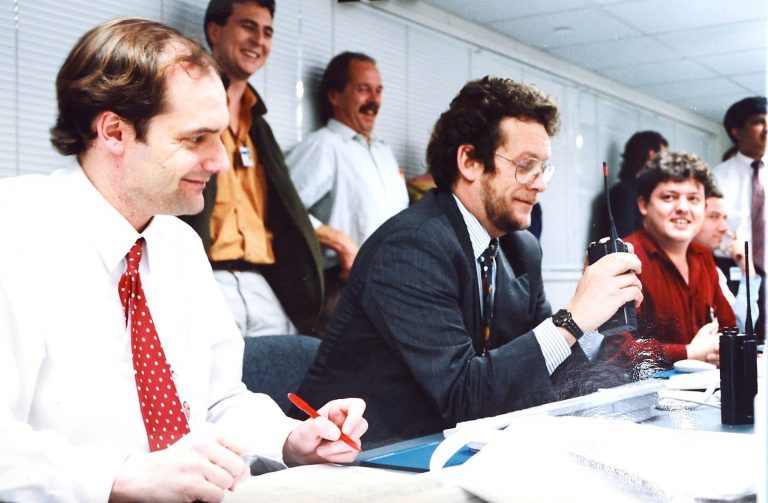 Obituary: Ewen Campbell – ‘A newspaperman, and a brilliant one at that’

Warm, funny, generous… A great colleague, an even better friend… The bloke you wanted beside you in the office as deadlines loomed, and sitting next to you in the pub afterwards. The tributes to Ewen Campbell have flowed thick and fast since Hong Kong lost one of its most talented and best-loved journalists.

An FCC stalwart, he lunched at the same table in Bert’s with the same close friends almost every Friday for more than 15 years; popular rants included Trump, Brexit and Boris. On Sunday afternoons, he was a regular at the China Bear in Mui Wo.

Hong Kong took to Ewen the moment he stepped off the plane in 1986 to join the South China Morning Post. And, despite a typically brutal introduction to Murdoch journalism – he was shafted before he even started – he returned the favour to the city with all that lust for life everyone loved in him.

Hired as sports editor, he arrived to find that seat taken and was shuffled off to the back bench before eventually taking over the sports editor’s role. At the time, Murdoch executives ruled the Post via a mix of fear and stupidity. Ewen (among others) took particular relish in winding up an especially thick deputy editor nicknamed BIFFO – Big, Ignorant Fucker from Oz.

Ewen next found himself at the centre of the launch of Eastern Express by the Oriental Press Group in 1994 where editor Steve Vines was quick to recruit him as production editor.

They were exciting, stressful times. “The launch deadline was very tight and the new technology shaky,” says former managing editor Jon Marsh. “His relentless energy and extraordinary ability to get people to work together pulled us through. He was the glue. Without Ewen, Eastern Express would never have met that deadline. He was a force of nature, and a wonderful friend and colleague.”

Despite the teething problems, the new daily was an editorial success. Relations with the management were at first cordial, with chairman CK Ma playing the role of generous patron. Over drinks one evening Ma asked: “Would you like a cigar?” Ewen replied: “A car?” Amazed, Ma countered: “You want a car?” He then gave him a second-hand runabout, a very slight upgrade on his old banger.

However, bolting an English-language newspaper onto a large, family-run Chinese newspaper group proved to be fraught with difficulties. Relations with management soon soured, leading to an exodus of senior staff, and it closed within two years.

By then Ewen was in Bangkok, working on another newspaper, Asia Times. Launched in 1995, the project was the brainchild of Sondhi Limthongkul, a flamboyant Thai media mogul. Again, Ewen helped muscle the publication into life despite working with an eccentric, almost comically inexperienced production team. But the newspaper suffered commercial challenges and fell victim to the 1997 Asian financial crisis.

Next stop was Auckland, where Ewen became sports editor of The New Zealand Herald before returning to Hong Kong in the early 2000s. He went on to work for the iMail and the satirical magazine Spike before re-joining the SCMP, leaving as night editor in 2012. Ewen later moved into corporate communications before helping to resuscitate the online version of Asia Times as an editorial consultant.

At the start of his career in England, he initially worked for the Whitley Bay Guardian and The Northern Echo and in 1979 joined the Daily Star. Close friend Gordon Watts said: “Ewen was always a newspaper man, and a brilliant one at that. He was also one of life’s good guys.” Another former colleague, Steve Wolstencroft, nailed it when he said: “There aren’t many people in the sometimes-backstabbing world of newspapers who never have a bad word said about them. Ewen was one of them. He was the bloke you’d want to have beside you in the office and next to you at the bar in the pub.”