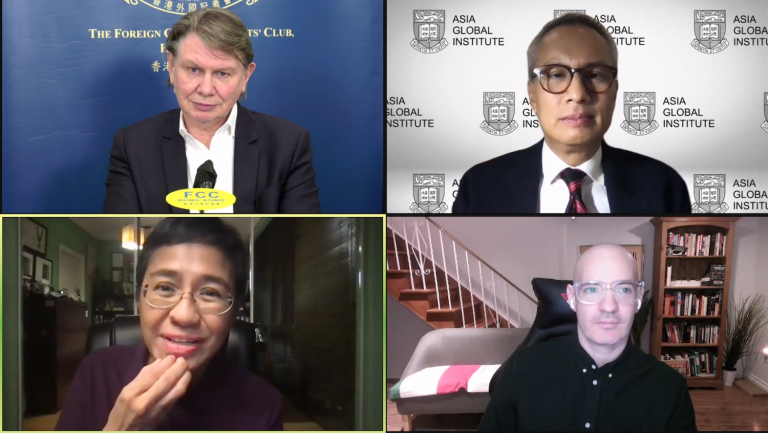 Panel: Freedom of Speech Should Be Limited in Some Circumstances

Freedom of expression has its limits when it comes to spreading falsehoods and promoting real-world violence, a panel of experts including Maria Ressa, Craig Silverman and Alejandro Reyes said on Tuesday night. Participating in a virtual discussion which was moderated by FCC First Vice President Eric Wishart, the panelists agreed that social media platforms have the right to ban users based on their online activity.

“It is definitely not an infringement on freedom of speech,” said Ressa, the CEO and president of Rappler.com. “We have to think about this as, ‘Here’s the public sphere and what are the guidelines?’ so that you can exchange ideas and actually talk instead of having influence operations or hate, disinformation and conspiracy theories thrown at you.”

“There’s no question that they should have the ability to remove people from their platforms, they should have policies” said Silverman, the media editor of BuzzFeed News and author of the Verification Handbook. “But at the same time, are they enforcing these things evenly, and are they even able to enforce them?”

Reyes, a visiting associate professor at the Asia Global Institute, agreed that platforms have the right to remove users as they see fit but raised concerns about governments pressuring social media companies to take these steps.

“Where we should be concerned is really the kind of situation that Maria faces in the Philippines, where you have a constitutional authoritarian system where ambiguity reigns and there’s weaponisation of laws and social media to silence people who want to speak truth to power,” he said.

Given that so-called fake news laws and tech companies’ internal policies have failed to control the rise of disinformation, extremism and violence, the panelists agreed that new solutions to these problems are urgently needed.

“For me the first step is: please stop the virus of lies that come into our information ecosystem,” said Ressa, “and that’s got to be done through legislation.”

With research showing that lies tinted with anger and hate tend to spread faster than facts, she argued that social media platforms can be viewed as inherently biased against facts and honest journalism.

Silverman advocated for specific legislative actions from democratic governments. “I think legislating around transparency and behavioural manipulation and setting some guardrails for those things may actually be doable,” he said.

Still, even if democratic governments rise to the challenge of enacting legislation that makes social media platforms more accountable, that may not be enough to solve the complex problems facing society.

Instead, governments around the world need to think about how to prepare their citizens to navigate an increasingly chaotic information environment and train them to identify reliable information sources.

“That is a long-term project but we need to be investing in it now and testing ways of teaching news literacy,” said Silverman. “That would certainly reduce the amount and spread of false and misleading information.”

Given the abundance of information sources and the ease of spreading it via social networks, Silverman argued that personal responsibility is at an all-time high.

“That is a big thing everyone needs to understand: your attention is valuable and the way you spend it, particularly on these platforms, helps to determine what spreads and what doesn’t, so we all have a role.”