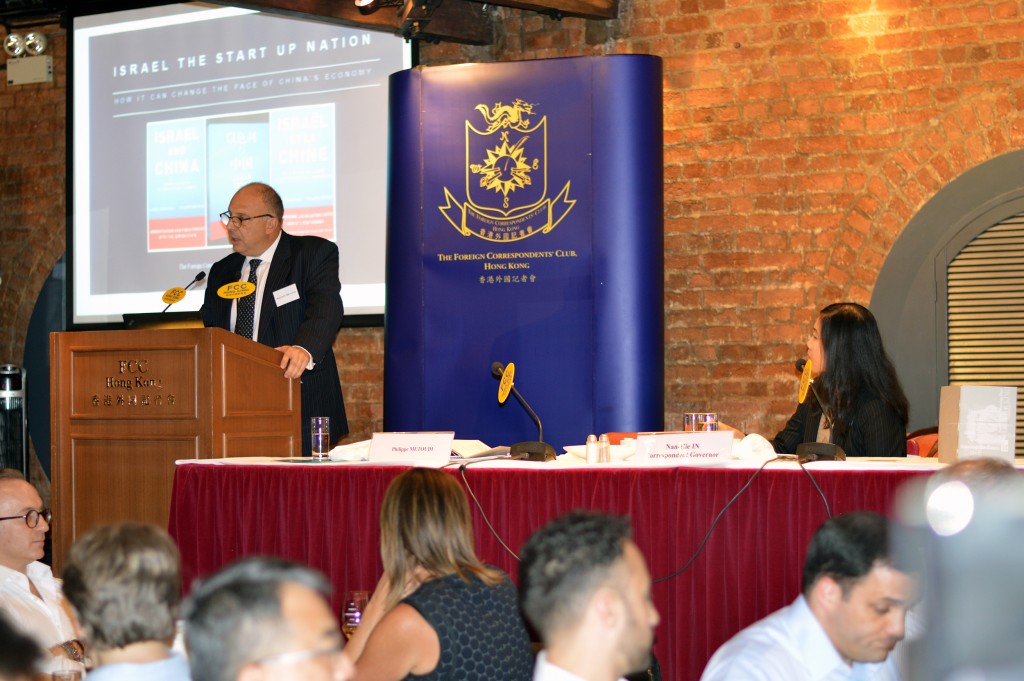 Philippe Metoudi: Why China’s billion dollar investment in Israel is only going to grow

China’s two-way trade with in Israel has gone from zero to US$4bn in the last three years, as the mainland seeks to position itself at the cutting edge of technological development, according to Philippe Metoudi, guest speaker at the October 25 club lunch.

Hong Kong’s Li Ka-shing has the largest investment in the Middle Eastern country – with more interests there than he has in the U.S. – but it appears online shopping giant Alibaba is also looking to invest significantly in Israel after owner Jack Ma bought Visualead, a QR code generator created in Tel Aviv. In fact, a growing number of China’s state-owned enterprises are acquiring Israeli tech companies, Metoudi said.

Why? In part because Tel Aviv is now widely considered second only to Silicon Valley in terms of its development of technology. And China’s powerful manufacturing capability at low cost is an attractive prospect for many Israeli firms, he said.

Metoudi, co-author of Israel and China: From Silk Road To Innovation Highway, recounted the long relationship between China and the Jewish state, a relationship set to prosper even further under President Xi Jinping’s plan to connect China with Eurasia – the so-called Silk Road Economic Belt – a feat Metoudi said could not be achieved without going through Israel. He said even Cathay Pacific was, from next year, going to introduce a new route to Israel for the first time.

But as far as Hong Kong’s tech start-up scene was concerned, the outlook wasn’t so rosy. Asked whether Hong Kong could catch up to Tel Aviv or even Silicon Valley, Metoudi said it was unlikely.

“There are two things lacking in Hong Kong. One is the mix of engineers. In Israel you get British engineers, Russian, French…” He said of the second: “A lot of people would be reluctant to be in Hong Kong due to the proximity of China.”

Having presented slides showing the China’s growing investment in Israeli companies, Metoudi concluded: “This is only the beginning. In five years I can guarantee that all the numbers I have shown you will be higher.”