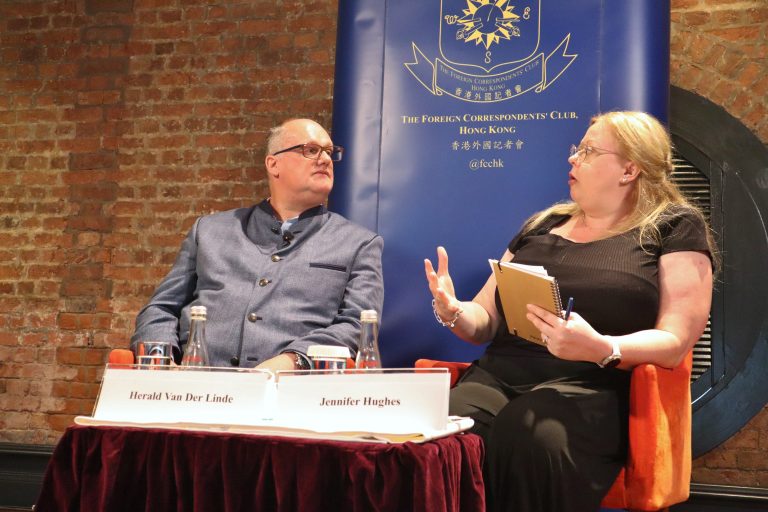 Anyone looking to invest or have a better understanding of how Asia’s stock markets function shouldn’t be paying attention to the performance of the Dow Jones Index, said renowned market analyst Herald van der Linde during a lunch talk at the Foreign Correspondents’ Club.

“You should look at what the bond market does first,” said van der Linde. “What happens there and how do we translate that back into the stock market?”

Van der Linde, who has worked at HSBC for more than 15 years and is currently Chief Asia Equity Strategist, is the author of the recently published book Asia’s Stock Markets from the Ground Up, a jargon-free beginner’s guide to understanding equities in the region. An FCC member, he previously wrote Jakarta: History of a Misunderstood City, which was released in 2020.

He highlighted the fact that bond yields have consistently declined in recent decades, thanks to more and more money being placed in fixed income instruments, which pushes interest rates down, but the trend could reverse if demographic changes cause a major shift in where money is invested.

He also said that many people focus on economic indicators such as GDP to analyze markets, but he disagrees with that approach.

“In particular in Asia, my view is that we don’t really have to look at that,” he said. “There’s a massive kind of disparity between what the economies are and what the markets are.”

He recommended digging deep to understand what drives companies’ profits, and he pointed out demographics, technology, government regulations and rising wealth as key factors to consider.

Van der Linde also addressed growing concerns over inflation, saying that he’s in the camp that believes the world is in a transitory stage and that inflation will calm down. Still, he admitted that the U.S. central bank had acknowledged that inflation was perhaps going to last longer than initially expected.

But he also said the central bank shouldn’t necessarily respond to pressure to raise interest rates to combat inflation, because growth had been prematurely stifled in the past as a result of such moves.

“The central bank has got to be careful because we’ve been in this situation three or four times over the last ten years,” said van der Linde.