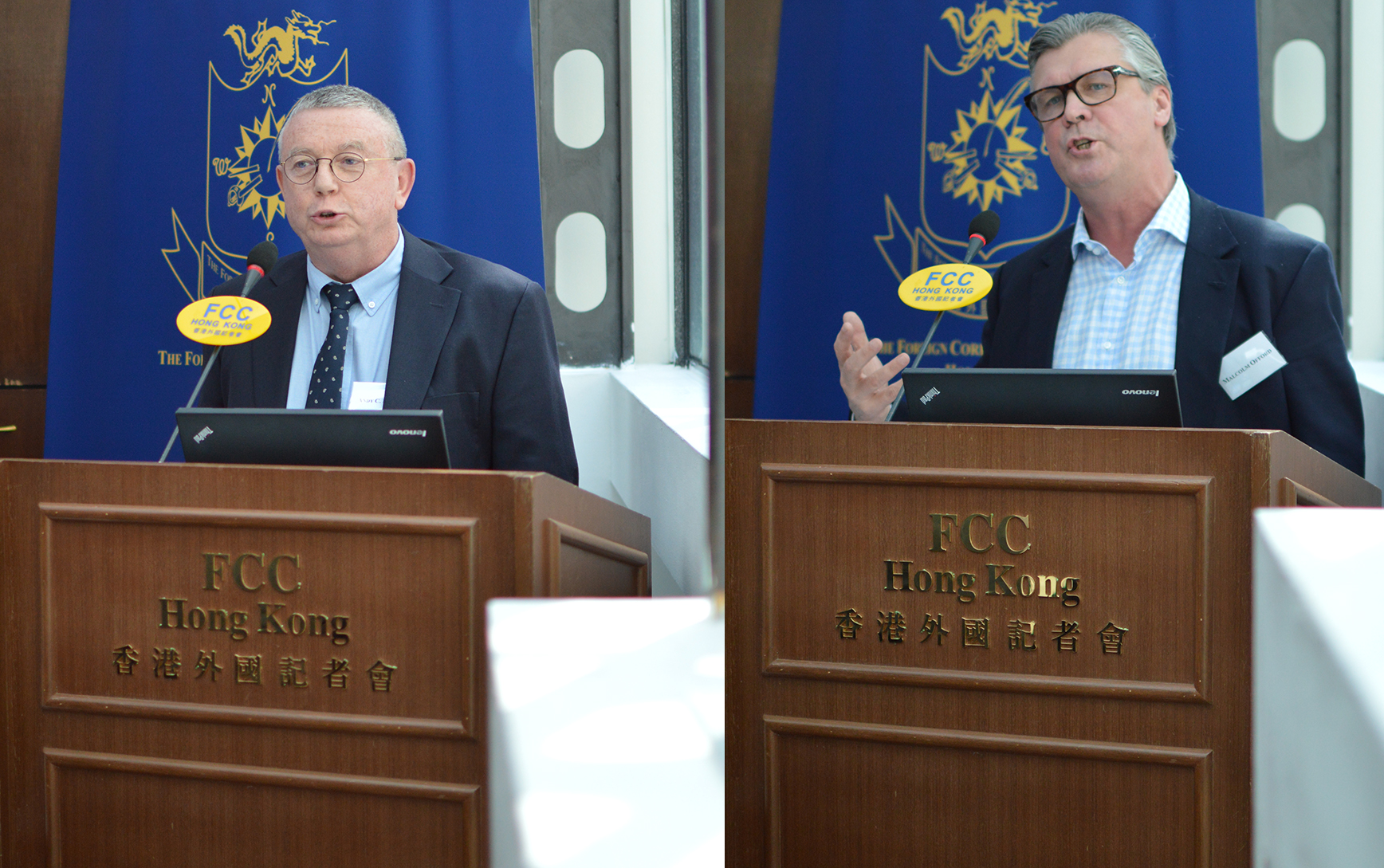 Successful Scots reveal highs and lows of life as entrepreneurs

Go with your gut instinct in business and learn from your mistakes – that was the advice from serial entrepreneur and co-founder of Wan Chai’s famous Joe Bananas bar at a lively club lunch.

Andy C. Neilson, also co-founder of military and civilian miniatures shop King & Country, joined fellow entrepreneurial Scot and founder of Badenoch & Co. Malcolm Offord in sharing the secrets of their successes – and failures. The pair spoke during the event titled From Scotland to Hong Kong: How Entrepreneurs Compete On the World Stage on October 25.

Both are at the helm of several thriving businesses, though Offord is based in Edinburgh, Scotland, where he is chairman of Badenoch & Co, which invests in emerging Scottish manufacturing companies. Among the many titles he holds, he is also a director of Cashmaster International Ltd which supplies leading retailers with top-of-the-range count-by-weight cash devices; and chairman of the National Museums Scotland development board.

Neilson, on the other hand, is a Hong Kong stalwart. He left his job as a Royal Marine Commando in “depressing” Britain in 1977 to join what was then Hong Kong’s Royal Police. After two years on a paltry junior inspector salary of HK$2,500 per month, Neilson, who had studied graphic design at art college in Scotland, moved first to the public relations arm of the police, then to the Government Information Service.

It wasn’t long before new opportunities came his way – opportunities that would only have been available in Hong Kong. “The one thing that impressed me once I got here was the wealth of opportunity,” he said.

With Laura, his first wife, Neilson set up a freelance graphic design studio which soon led to a weekly cartoon in the South China Morning Post. Not long after Laura took a job in the popular Bull & Bear pub in Hutchison House, the couple decided to open their own bar. Mad Dogs in Wyndham Street, named after the Noël Coward song but without the Englishmen – “…we wanted a British-sounding name but, being Scottish, there was no way we’d keep Englishmen.” – opened its doors in 1984.

It was such a success that Neilson and his wife went on to open the legendary Joe Bananas – named after an infamous gangster – in Wan Chai. King & Country, one of the world’s major designers and producers of all-metal, hand-painted 1:30 scale military and civilian miniatures, was their next venture.

By his own admission Neilson said he had made plenty of mistakes along the way despite managing several thriving businesses. One such error of judgment was not buying the building which was home to Mad Dogs. The owner offered it to him in the late 1980s for HK$6m. Because Neilson had only recently opened Mad Dogs, into which he’d ploughed all his money, so he said no. He was offered it again a year later for the slightly increased sum of HK$8m. This time all his cash was tied up in Joe Bananas, so he again was unable to take up the offer. The building later sold for HK$80m. “That’s a case of when you miss the boat,” Neilson said.

Offord started out as a law graduate at Edinburgh University but he “hated the subject”. Nonetheless, he went on to have a successful 27-year career in the City of London. But his passion these days is a focus on encouraging Scotland’s growth through manufacturing. To that end he is also chairman of Borders Whisky Distillery in the Scottish Highlands, with its newest distillery undergoing a £10 million refurbishment to turn a disused industrial site in Hawick into a modern distillery.

As chairman of the National Museums Scotland development board he has also been instrumental in the ambitious 15-year refurbishment project taking place there. The museum is home to several exhibitions with ties to China, including the largest collection of bones outside the country. He wants to highlight the success of Scots abroad. He said: “It’s about collections sent back from around the world by Scots who went overseas and were successful in foreign lands.”

During the lengthy whisky distilling process Offord said he would produce gin using plants from Kew Gardens that were harvested from overseas by the top ten ‘plant hunters’, all of whom were Scottish.