News News “The implementation of ‘One... 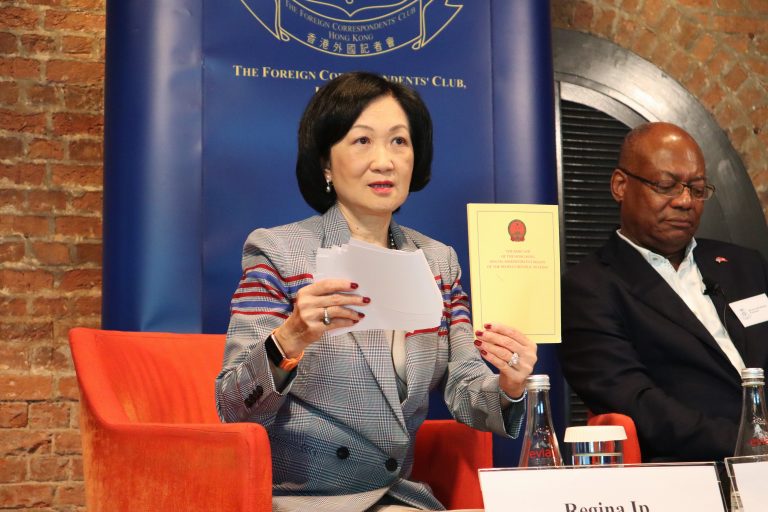 “The implementation of ‘One Country, Two Systems’ was never expected to be painless” – Regina Ip

Offering an overview of the relationship between China and Hong Kong, longtime public servant and politician Regina Ip, a member of the Executive Council and the Legislative Council, said that tensions between the mainland and the SAR were natural and to be expected.

“The implementation of ‘One Country, Two Systems’ was never expected to be painless and trouble-free,” said Ip during a lunchtime talk at the Foreign Correspondents’ Club. “It is a bold and innovative concept, but the accommodation of a small but radically different system within a large, continental-size economy, is bound to be fraught with tensions and challenges.”

Describing One Country, Two Systems as “a reunification project,” she offered a firsthand account of being present at the negotiations between Britain and China that preceded the Joint Declaration. She also reflected on her time as the Secretary for Security, when she was responsible for implementing Article 23 of the Basic Law, which led to widespread protests.

“It is really a great pity that my draft bill did not get enacted,” said Ip. “If it got enacted, it would not have been necessary for Beijing to do it for Hong Kong. I experienced firsthand how a legitimate constitutional requirement to protect national security was scuttled at that time because of widespread misunderstanding of our constitutional responsibility.”

Speaking about the National Security Law enacted in 2020, Ip was quick to defend it.

“The implementation of the National Security Law is bound to impose certain new limits on Hong Kong people’s freedoms, but this trade-off between security and freedom is a universal phenomenon,” said Ip. “Hong Kong’s National Security Law remains much milder and more restrained than similar legislation in many other jurisdictions.”

She continued: “Our judiciary remains independent in reaching judicial decisions, and robust in upholding legal principles.”

Asked to comment on freedom of speech under the National Security Law, Ip did not seem concerned.

As for Hong Kong’s future, Ip was wholeheartedly optimistic: “Our economic integration with the GBA will bring unprecedented opportunities to the people of Hong Kong.”

In conclusion, she said, “My personal opinion is that the future of Hong Kong cannot be brighter.”