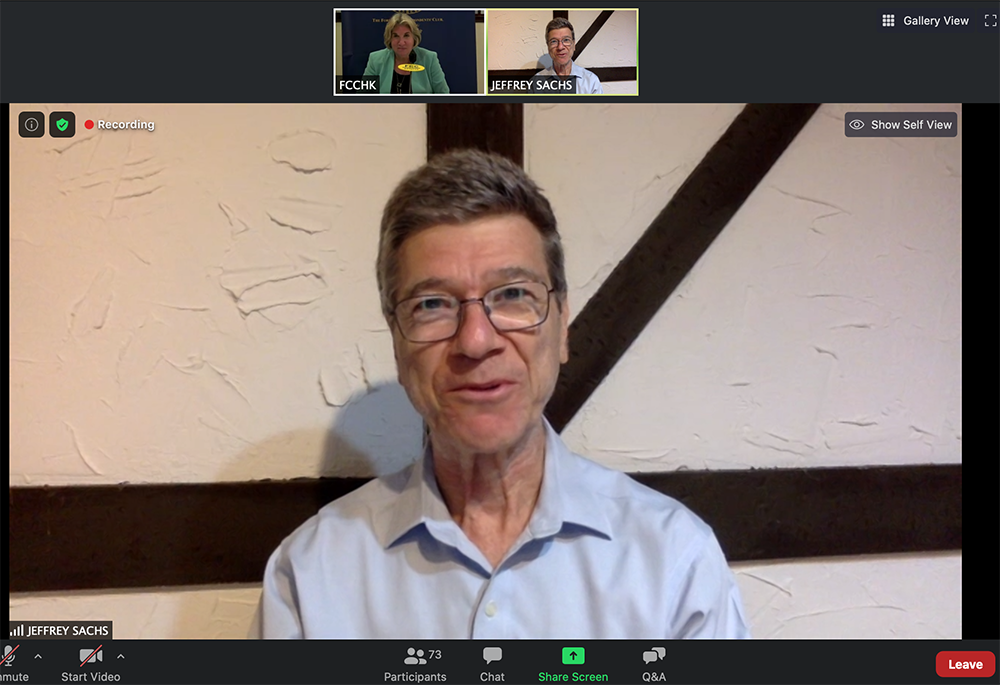 U.S./China relations: The world is at stake, warns top economist and global thinker

Improved relations between the United States and China is vital to global stability, according to economist and author, Professor Jeffrey Sachs.

Speaking during a July 20 FCC webinar on how global cooperation is needed to solve some of the challenges currently facing us, Prof. Sachs said that if former Vice President, Joe Biden, were to win November’s election, he would advise him to work on relations between the world’s two largest economies.

“I think the U.S./China relations are so vital for the world that it’s extremely important to set in place a thorough and high-level, extensive and serious interaction between the two countries,” Prof Sachs said. “Between the U.S. and China, the world is at stake.”

Prof. Sachs, director of the Center for Sustainable Development at Columbia University in New York, opened the discussion with the assertion that if President Donald Trump were reelected, the world would likely spiral out of control. Referring to the president on several occasions as ‘mentally ill’, Prof. Sachs said Trump’s ‘dangerous view of the world’ had spilled into global politics, leading to polarisation instead of the cooperation needed to face into current issues including the coronavirus pandemic.

“We cannot have [global] cooperation with Trump as president,” he said, adding that America’s ‘unilateral attacks’ on China meant ‘there can be no deal-making’.

Trump had shown ‘zero restraint’ in governance over the last three years, relying on executive orders and emergency decrees as he frequently bypassed the Senate, Prof. Sachs said. When asked whether he had considered any ‘nightmare scenarios’ of what Trump might do in his final days in office should he accept defeat at the election, Prof. Sachs answered: “Given his psychopathology, he is capable of lashing out in a serious way.” He speculated that this could be in the form of sparking a diplomatic crisis or making an international declaration of war.

Prof. Sachs, a best-selling author and former adviser to three United Nations Secretaries-General, attacked Trump for his Administration’s slow and chaotic response to the COVID-19 outbreak, which at the time of writing was responsible for the deaths of more than 140,000 American citizens.

“Our country was completely incapable of addressing the epidemic,” he said, adding: “Trump, because he is a mentally ill man, he is truly incompetent because everything is viewed through the lens of ‘how does this look on the daily news?’”.