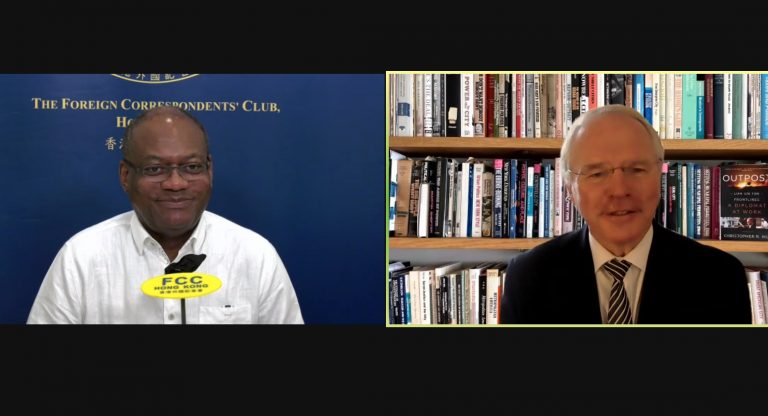 “I do believe that we need to find patterns of cooperation with China,” Hill said. “I think China is the number one foreign policy issue that this administration has to deal with, and with the understanding that we can no more change China than China can change us.”

The former Assistant Secretary of State for East Asian and Pacific Affairs, who is currently an adjunct professor at Columbia University’s School of International Public Policy, spoke on a range of topics relating to the U.S.-China relationship including Taiwan, the Quadrilateral Security Dialogue, trade agreements and the South China Sea.

Ambassador Hill said that he didn’t think the possibility of a military conflict in the region was imminent or even likely, though he acknowledged the possibility for surprises. “If you look through history at various wars and conflicts, accidents are often among the causes,” he told FCC President Keith Richburg during the talk.

One crucial area of cooperation for the two countries to focus on is North Korea’s nuclear weapons programme, said Hill, who was the head of the U.S. delegation to the Six Party Talks.

“I think we need to see if we can come to an understanding with the Chinese that we need to get North Korea to abandon these weapons,” Hill said, adding that the key task at hand was to make the case that the country would have a better future without nuclear weapons.

He also said that Pyongyang’s ultimate goal is to remove the American presence in South Korea.

“I think the North Koreans have the kind of vague notion that if they can just get the U.S. troops off the Korean Peninsula, somehow things will go more their way,” Hill said. “They need to be disabused of that in a big hurry.”

Commenting on the situation in Myanmar, Ambassador Hill described it as “an extremely frustrating issue” and called for multilateral cooperation to address the country’s crisis following the recent military coup.

“We need a lot of discussions in the region including with India and China and, of course, our ASEAN partners,” Hill said.

“We need Myanmar to understand that this is leading nowhere and no one supports them in the direction they’re going.”