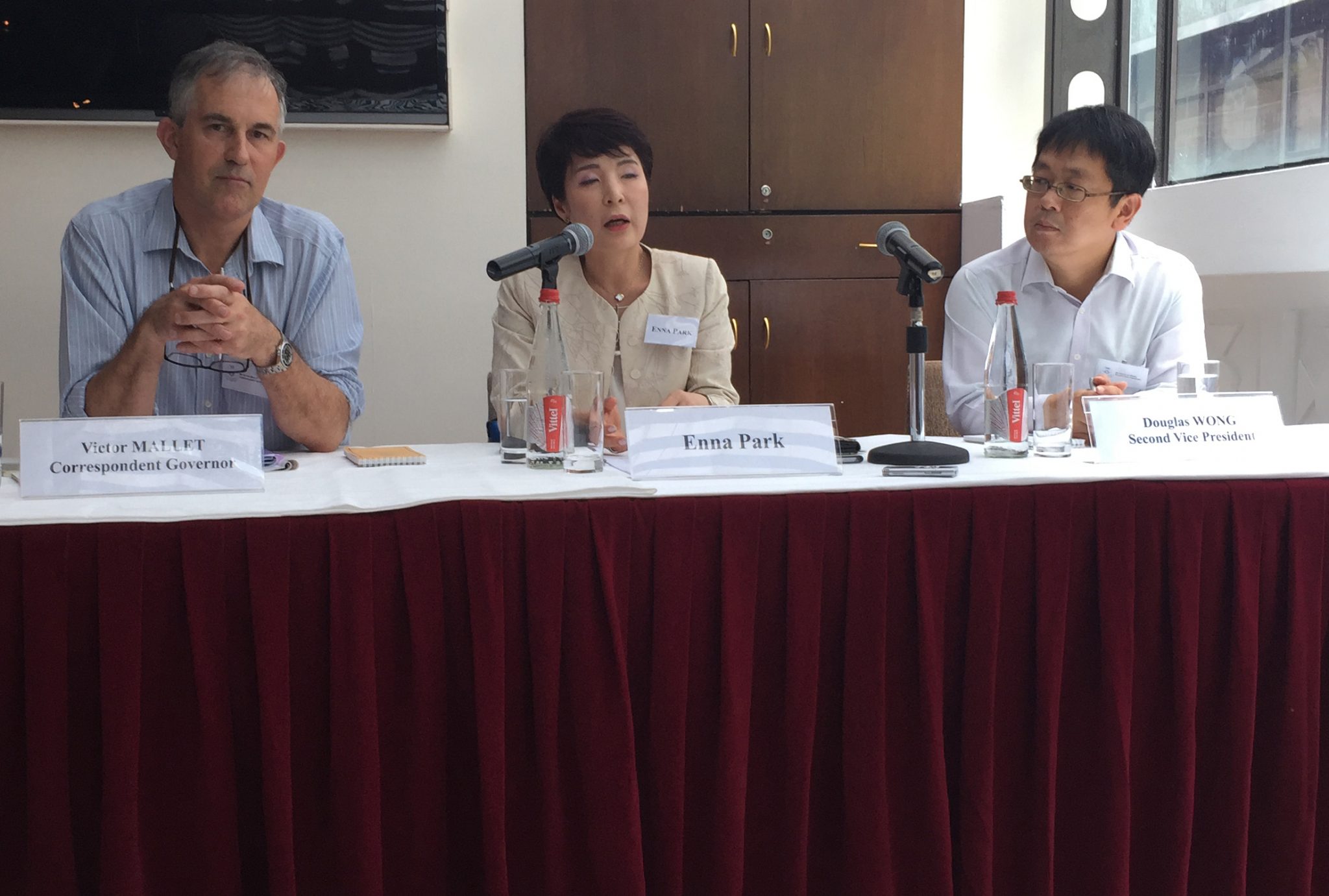 We want reunification dialogue with North Korea, but only after nuclear program is stopped – South Korea

Enna Park, centre, during her press conference at the FCC. Photo: Sarah Graham/FCC

South Korea hasn’t taken its unification hopes off the table, but North Korea will need to ditch its nuclear program before such dialogue can begin, said South Korea’s Ambassador for public diplomacy.

Enna Park was talking at a press conference held at the FCC on June 27. She said that South Korea’s new president, Moon Jae-in, was keen to open up communication with the DPRK (Democratic People’s Republic of Korea) but that talks were unlikely unless sanctions, coupled with incentives to drop nuclear development, were to come to fruition.

“When the conditions are right, when North Korea feels more comfortable talking with South Korea, we will have dialogue with North Korea. We will not attempt to unify North Korea by any means. It doesn’t mean we’re not keeping up our aspirations for reunification,” she said.

When asked whether South Korea’s new government was seeking engagement with North Korea, and whether the time was right for engagement in light of the death American student Otto Warmbier at the hands of the regime, Park said: “Yes, engagement is on the menu. No, it is not the right time to engage North Korea. The government wants to open the room to engagement if conditions are right in the future. We do not have a very concrete, clear description about conditions. It is subject to further consultation.”

She added: “The death of Otto Warmbier is very horrible, it reminds us of the horrible violation of human rights by North Korea.”

On the topic of South Korea’s plans to deploy a U.S. anti-missile system, and China’s reaction by urging boycotts of South Korean companies operating in China, Park said the government’s priority was protecting its people: “Probably it’s better not to try to please everybody. It is a critical asset to us to protect our own security. The priority is our national interest, our security. The top priority is not how to please the others.”

…we cannot rule out some intentional launch of missiles towards China under circumstances in the future.

She added that she was aware that China was concerned with how the system might be used – “they have their own concerns on the possible use of system to surveil what’s going on inside Chinese territory” – but said that her government was ready to discuss those concerns with China.

Having worked for many years at the Korean embassy in Beijing, Park also shed light on the threat felt by China from its ally North Korea. “The direction of missiles launched by North Korea is usually headed to South Korea western sea or eastern sea,” she said. “I think China had some worries about a possible mistake… or we cannot rule out some intentional launch of missiles towards China under circumstances in the future.”

Park also talked of the bridges South Korea is are attempting to build with Japan, with which it also has historical conflict, namely the use of Korean females as “comfort women” for Imperial Japanese soldiers during World War II. She said South Korea’s previous government had wanted to resolve historic matters before pressing on with any regional partnership.

“The previous government took the approach that we have to solve history problems first then liaise with Japan, but this approach actually didn’t bring any good result,” Park said. “So the new government has a two track approach: on one hand we’ll continue to work on history issues. On the other hand we will work with Japan to achieve common goals – solving the nuclear problems of North Korea and establishing peace in the region… creating synergy for economy, so many things that we can work together.”

When World War II ended in 1945, Japan lost control of Korea to Allied forces, leaving Korea to be divided in two, with the Soviet Union administering the northern half and the United States administering the southern half. Since then, the threat of nuclear annihilation as the north began developing nuclear capabilities has hung over the south.