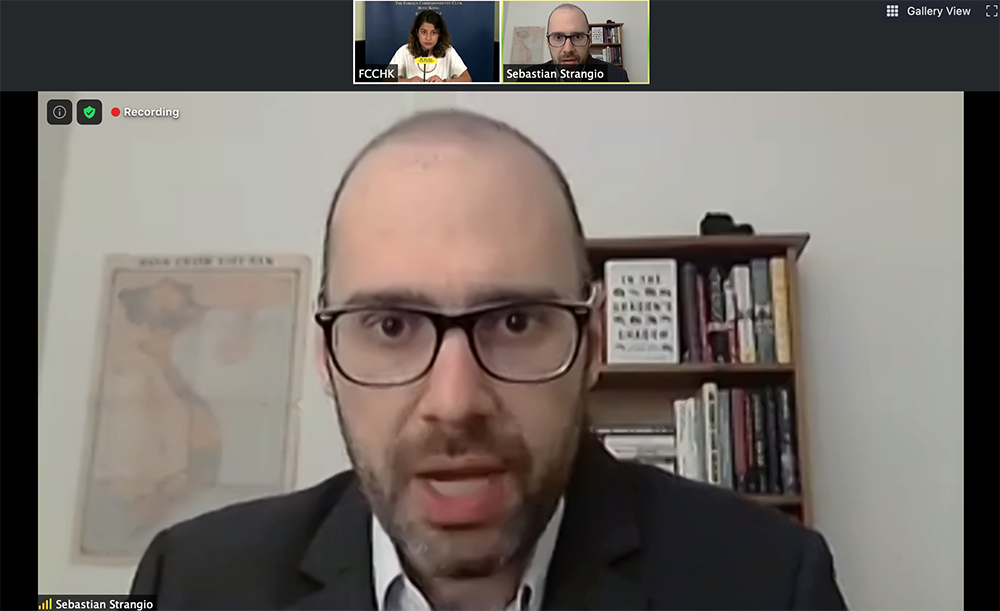 China’s dominance in Southeast Asia has been hit by its response to the COVID-19 pandemic, according to author Sebastian Strangio.

The Southeast Asia editor of The Diplomat told an October 12 FCC webinar that the onslaught of the coronavirus had furthered a trend that was already underway in the region which was that the “image of both the United States and China are suffering in Southeast Asia”.

This trend was borne out before the pandemic in the surveys conducted by the ISEAS-Yusof Ishak Institute in Singapore that showed amongst elites and opinion leaders in the 10 nations of ASEAN “a pretty significant souring on both of these powers for different reasons”, Strangio said.

“What we see is a lot of Southeast Asia nations concerned about China’s initial response to the pandemic.. allowing it to get out in the first place. Concerns about the region’s over-reliance on China in terms of when the pandemic arose there – the first cases outside China arose in Thailand I think … Also the fact that China took the opportunity to assert its maritime sovereign claims in the South China Sea. I think in the affected nations that was seen with a great deal of negativity,” he added.

However, Strangio said he believed the pandemic would not ameliorate China’s main advantage in the region – its geographic proximity which, he said, is a “structural underpinning of Southeast Asian relations with China”. As COVID-19 and its  economic after-effects continue to ravage the region, he added, “China is looking more and more like an unavoidable economic partner”.

Strangio, author of In the Dragon’s Shadow: Southeast Asia in the Chinese Century, said China is currently reaffirming its commitment to Southeast Asia, assuring ASEAN partners that it will help the region recover from the virus physically (via its signing of vaccine access agreements), economically, and politically.

China, he said, has a basic security dilemma in that it has “formidable rivals” on every side: nuclear powers India and Russia, and “a string of U.S. treaty allies – Japan, South Korea, the Philippines, and Taiwan”. Southeast Asia is the one region in China’s neighbourhood that does not have an incumbent great power constricting the power of Chinese influence, Strangio said. This made it a region “relatively amenable to the extension of Chinese influence”. The Chinese economy relies heavily on the vital sea lanes of the South China Sea and wants to protect them, he said.

“China views itself as a dominant power in the region once again, it is reclaiming a mantle that it lost 150 years ago with the rise of western empires and I think what we can glean from its behaviour occasionally from the comments of its officials is that China wants the region to be deferential, it wants the region to acknowledge China’s size and prominence through deference to Chinese aims.”

On China’s relationship with the United States, Strangio said a Biden presidency would not bring any significant shift in America’s policy towards China, adding: “I think a corner has been turned that will not be reversed.”