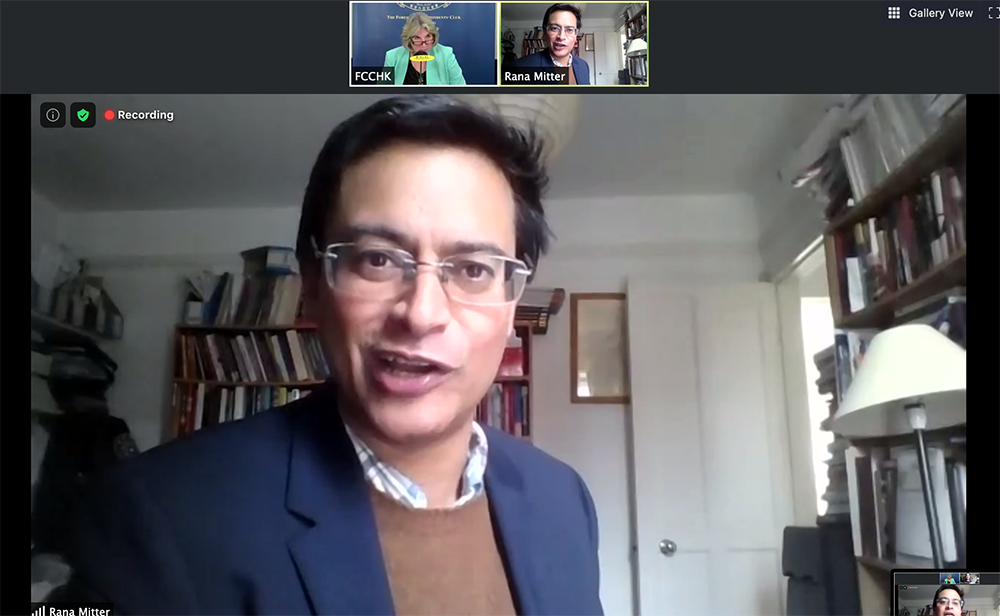 China’s “wolf warrior” diplomacy has contributed towards its damaged global reputation, according to author and China scholar, Professor Rana Mitter.

Speaking in the week that new research showed unfavourable views of China has reached record highs, Mitter told an October 7 FCC webinar that the country’s often aggressive style of diplomacy could have influenced the United Kingdom ’s decision to drop Huawei as a provider of 5G.

The report from Pew Research Center found that sentiment towards China had grown more negative in recent years across many advanced economies, and in particular unfavourable option had soared in the past year.

Mitter, Director of the China Centre at the University of Oxford, noted that an escalation of “wolf warrior” diplomacy had appeared to occur at the peak of the COVID-19 pandemic. He added that there was a sense within the Chinese Communist Party that such an approach had “been really damaging to China’s reputation”.

“Anyone who thinks it’s been part of some great wider thought-through propaganda effort I think needs to look at the results of it,” he said, citing Huawei’s failed 5G bids. He added: “It seems to me if you were actually sitting in Beijing plotting and planning you would not do the things that have happened which, as we say in Britain, tends to suggest cock-up rather than conspiracy.”

While the research found China had firm support at home over its handling of the pandemic, “it’s got a very bad reputation in the global north and it will need to start from there in terms of thinking where are they going now”.

President Donald Trump’s “aggressive rhetoric” and China’s “wolf warrior” mode response has led to a deterioration in relations between the world’s two largest economies. Mitter said he believed a change of government in the United States would reset the relationship.

“My sense is if we have a Trump administration I think we’re going to go further down the route we are now which is with a huge amount of very confrontational rhetoric on both sides. People talk about Trump’s aggressive rhetoric – I think that’s true – China has been responding a lot in the ‘wolf warrior’ mode. Both of these things have to be acknowledged,” he said.

Mitter added that Democratic hopeful Biden would find a new way of addressing “the problems that involve dealing with a large, growing authoritarian powerful economy in the shape of China”. He acknowledged that “many people in western Europe” were concerned about China’s growth, its expanding military and its stance on Hong Kong.

The United States, he said, had abandoned alliances and “respect” for the post-1945 world order which was also problematic for Europe.

“The Biden administration, if there is one, would be able I think to pick up the phone to the EU, it would be able to talk to London … talk to Japan, talk to South Korea – all the people who for 75 years have been part of that wider ecosystem of shared norms and liberal norms… and actually say ‘let’s talk about how we do this together’,” Mitter said.

On the topic of Hong Kong, Mitter said it was important that authorities outline their vision for the city in the context of the new national security law, which was imposed on July 1. He said it was not clear from the outside what the various interest groups involved want to happen.

“And this is as true, I think, for those protesting as it is for those upholding what they would portray as being the current status quo,” he added.

Mitter discussed his latest book, China’s Good War: How World War II is Shaping a New Nationalism, which explores how influential World War Two is on today’s China. From this summer’s wartime blockbuster, The Eight Hundred, to the successful TV series, Autumn Cicada, the Second World War is “an historical obsession” in China.

He explained that U.S. participation in World War Two was ‘good’ in that it created a “narrative of moral purpose, of how America had stood up and fought against dark forces”. China, he said, has turned back to its World War Two experience, when over 10 million died, and 100 million people became refugees.

“All of this has gone to construct a narrative today and over the last 20-30 years in which China seeks to portray itself to the world as also having taken part in a ‘good’ war in the sense of a World War Two that helped make the world safe for decent forces rather than the forces of the axis power,” Mitter added.