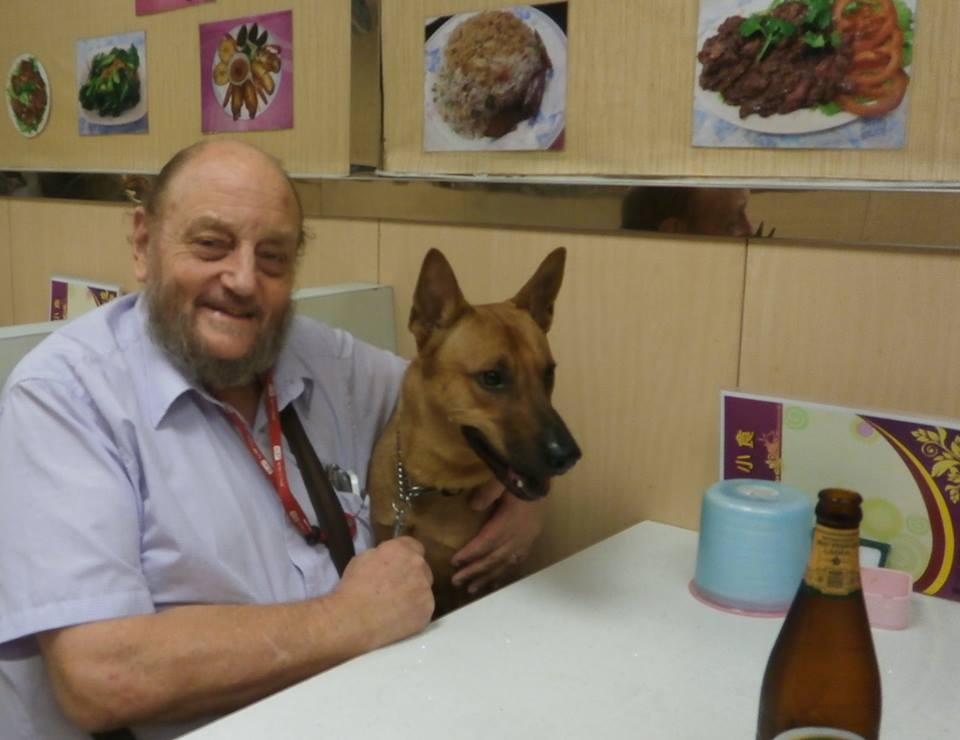 Mike Simms, veteran editor with a career that spanned over five decades in five countries, died at 73 in early January.

Always the gruff gentleman, Mike could often be found holding up the Main Bar at the end of a late shift sharing his stories and strong opinions with the likes of Greg Torode and the late Walter Kent.

Armed with a razor-sharp wit, mastery of English and grasp of Latin, Simms will be remembered for schooling generations of reporters and sub-editors on the importance of good language, saving many a story from the trappings of tautology and verbiage.

Mike Simms, centre in the checked shirt, died in early January. He is pictured here with colleagues from the South China Morning Post. Photo: Facebook

His trademark dry humour would be displayed regularly on Facebook – often as sardonic one-liners or via his wildly popular “tautology of the day” posts. Many would feature his beloved dog Scrap, with whom he enjoyed a good hike.

“Despite his gruff exterior, Mike had a mischievous sense of humour that will be sorely missed by all those who knew him in both the newsroom and his favourite Wanchai bar,” a friend and fellow journalist said.

Simmsy, as he was affectionately known, made his mark and a lot of friends in many newsrooms: he was, before his time in Hong Kong, deputy news editor of the Evening Star, chief subeditor and columnist at the New Zealand Herald;  The Guardian and Sheffield Morning Telegraph in the UK; deputy chief subeditor at The Age, Melbourne; and chief copy editor at The Monitor, Singapore.

He joined The Standard in 1987, working his way up from chief copy editor, chief sub and night editor to editor. Simmsy joined the South China Morning Post in 2004 as chief copy editor and retired in 2014.

Simms, described as a “firebrand editor” with high expectations and “a true individual”, often gave short shrift to so-called conventional wisdom or the “standard Western view”.

Deeply competitive, he abhorred the bad use of English and those who transgressed were unlikely to do so again.

Simms set himself up as a freelance copy editor after his retirement where he continued his tireless campaign… On his “Good Language” website, Simms wrote: “Times are tough for our language, as mass media abandon time-honoured quality-control procedures and the days when no one’s work reached the public without undergoing rigorous editing fade into pre-internet history.

“These aren’t just the arcane concerns of some crusty old grammarian, they should be the concerns of anyone who relies on the language as an effective communication tool.

“Time will tell whether this trade-off between credibility and cost will prove sustainable for outlets that need to be taken seriously. I suspect not.”

Damon, his son who lives in the Philippines, said on a Facebook posting that Simms “loved Hong Kong with a passion”. He was self-taught in Cantonese and was “a decent cook” of his favourite local dishes.

Post editor-in-chief Tammy Tam said: “I was very saddened to hear of Mike’s death. He was a hugely influential and dedicated member of our local news team, and did much to mentor our reporters and sub-editors. His knowledge of Hong Kong society, politics and government policies allowed him to speak with authority, whether it was with our most senior editors or cadets. We shall greatly miss his voice of reason.”

Simms fell ill in the Philippines three months ago while on one of his regular visits to see his young granddaughter, Gabriella. He returned to Hong Kong and was admitted to hospital with a leg infection. He suffered pneumonia in mid-December and died at Queen Elizabeth Hospital.

“I think I speak for everyone when I say that a very large part of our lives disappeared on Friday, and that his passing has left a hole in many people’s lives that will never be filled,” Damon said.