News The Correspondent Speaking Up for Press Freed...

Speaking Up for Press Freedom in Hong Kong

FCC First Vice President and Press Freedom Committee co-convener Eric Wishart revisits the club’s core mission – and the many ways in which it has fought for unfettered, independent journalism since its founding.

Ming Pao’s Lai Chun Kit won the People’s Choice Photo Award at the Human Rights Press Awards 2020 for his shot, “Mattress Shield”, which was taken during clashes with police at the Chinese University of Hong Kong in November 2019.

Hong Kong has been through turbulent times over the past year with the protests and unrest, the COVID-19 pandemic, and most recently, the imposition of the national security law. The club has witnessed many seismic events since it was founded in China in 1943 and subsequently moved to Hong Kong after the establishment of the PRC in 1949.

From a handful of foreign correspondents that established our foothold in Hong Kong, the FCC has evolved to become one of the most famous and prestigious press clubs in the world, with a large and diverse membership. The FCC is a vibrant place to meet, share views and bring guests. As we have seen over the past year, it serves as a welcoming oasis in troubled times. 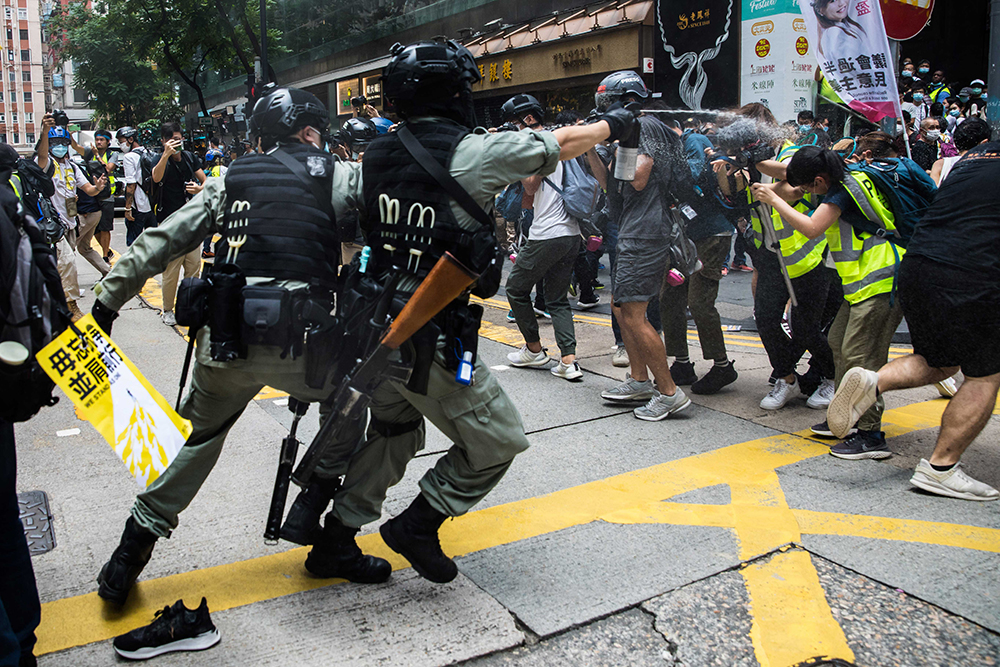 It is also important that all members – journalists and non-journalists alike – understand that the defence of press freedom is fundamental to the club’s existence. As the FCC site asserts:

“The club’s core mission is to promote and facilitate journalism of the highest standard, and to promote press freedom across the region.”

Our press freedom actions take a number of forms. For two decades, we have jointly organised and sponsored the Human Rights Press Awards, recognising journalists in Hong Kong and throughout the region for fearless and distinguished reporting. Often focusing on press freedom or human rights themes, our Wall exhibits in the Main Bar showcase the best in photojournalism.

Our speaker events often involve press freedom issues. Last year we held a series of briefings, which we opened up to the community, to help journalists deal with the multiple challenges of covering the protests. When the government adopted the national security law, we held a panel discussion with experts on the potential implications of the law for journalists and press freedom.

We mark World Press Freedom Day and hold shows of solidarity after attacks on journalistic freedom, such as the terrorist attack on the satirical magazine Charlie Hebdo in Paris in 2015.

Engagement is important, and over the past year, we have met representatives of the Hong Kong government, the Chinese Foreign Ministry and the Hong Kong Police Force. Dialogue remains essential.

The most powerful weapon journalists and defenders of press freedom have at their disposal is the power to shine a light on abuses and threats to the unfettered reporting of the news, which should be conducted without fear or favour.

Silence only encourages those who would turn the free press into a compliant tool and create an environment where journalists work in fear of losing their accreditation, work visas, freedom of movement, or in extreme cases, their lives. Keeping your head down, not “rocking the boat” and hoping things will get better never works when faced with enemies of press freedom.

At the FCC, the Press Freedom Committee is responsible for dealing with the club’s response to threats against journalists and the media, which includes our public statements and letters to the appropriate authorities. It comprises about a dozen members – all working journalists with a wide range of experience. 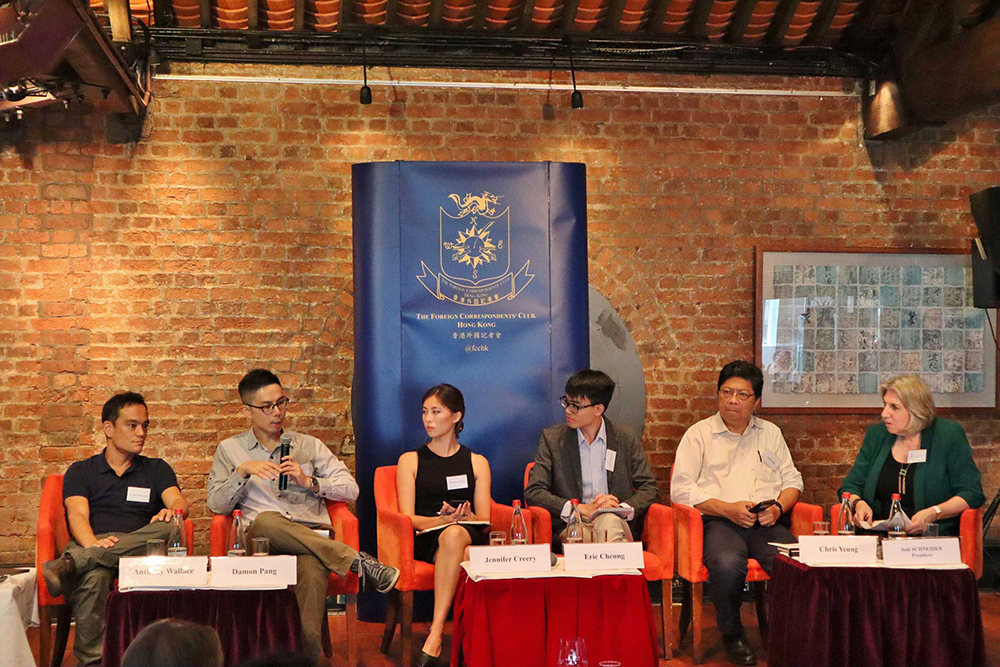 The FCC hosted a lunch panel on the protests and press freedom on 8 August, 2019. PHOTO: FCC

It represents members of the local and international media and includes journalists at the start of their careers as well as experienced correspondents who have faced a range of press freedom challenges, including in war zones and dealing with dictatorial regimes.

A large number of journalists at the club and in Hong Kong have confronted risks to press freedom, from facing physical threats to vicious online trolling. They have faced up to dictators and authoritarianism and seen colleagues imprisoned, kidnapped and killed.

The committee focuses on challenges to press freedom in Hong Kong, although it will occasionally take up high-profile cases such as the jailing of two Reuters journalists in Myanmar, expulsions of journalists from China, and the jail sentence against Rappler executive editor Maria Ressa in the Philippines. When it comes to cases outside of Hong Kong taken up by the committee, there is often an FCC connection.

The Press Freedom Committee responds to sudden events such as physical assaults or arrests of journalists in Hong Kong, as well as broader issues, such as the cumulative effect of delays in granting visas to correspondents. 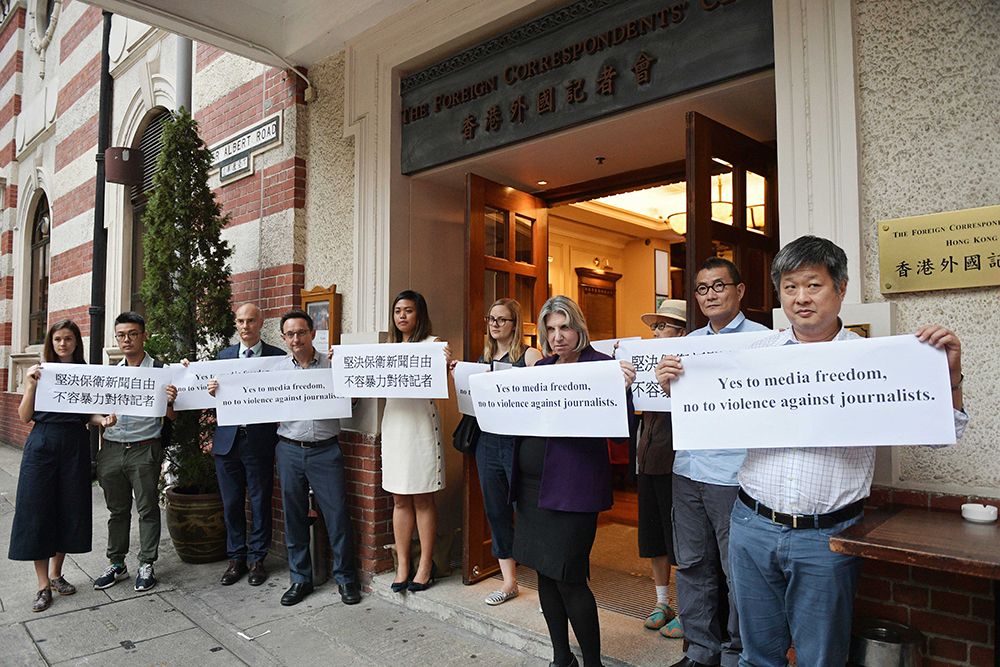 In practical terms, once the committee has decided to act on an issue, a member is designated to write a draft that is then circulated for discussion to the rest of the committee. The process can take a few hours or longer, depending on its complexity. Once the conveners and president sign off on the final version, it is posted on the site, shared on social media and sent to the Board of Governors.

It is important that the club speaks with its own voice – we post statements from other press freedom groups on the FCC site, such as the Hong Kong Journalists Association, Reporters Without Borders, the Committee to Protect Journalists and the International Press Institute.

However, we limit our social media posts to our own statements, and we avoid taking part in joint statements. We believe that the club should maintain its independence and be answerable solely for its own actions.

Why should the FCC speak up? The best defence of press freedom is to expose abuses and threats, engage with the relevant authorities when necessary, and respect the core mission that was entrusted to us by the founders of the club. Silence is not an option.