News The Correspondent The Troubling Reality of Pr... 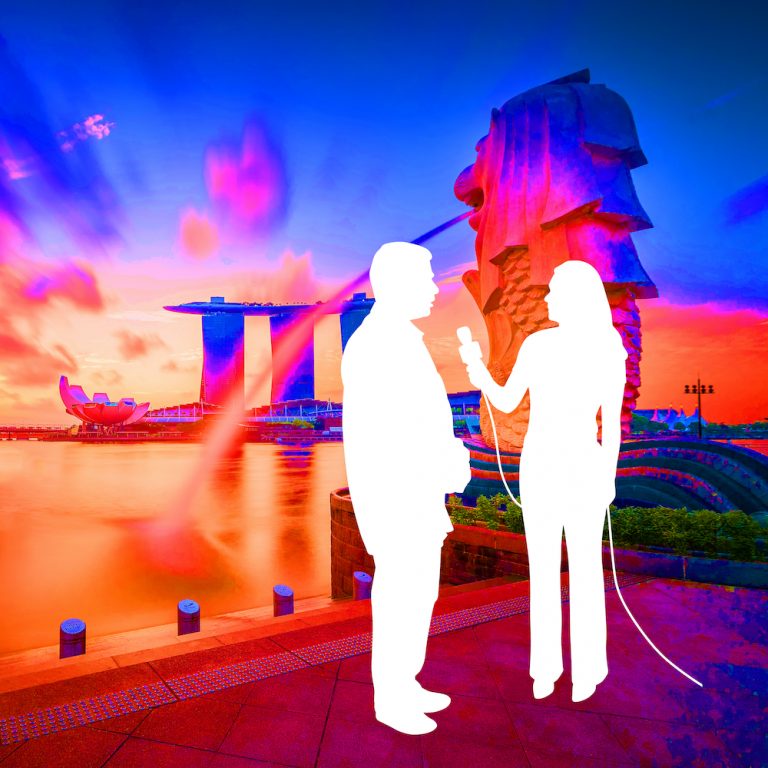 The Troubling Reality of Press Freedom in Singapore

Journalists shopping around for a new home base in Asia may find that the Little Red Dot has thick red lines. Alexis Ong reports from Singapore.

Beijing is no longer a spectre that looms over Hong Kong, but a very tangible presence in the form of the National Security Law, which came into effect on 30 June 2020.

Since then, many Hong Kong-based journalists and media outlets have been tempted to consider alternative home bases in Asia, including Singapore. But press freedom in the city-state is arguably more draconian.

Having written a story for The Initium on how Singapore could be impacted by Hong Kong’s instability, Singaporean journalist and activist Kirsten Han explained that the city-state is far from a bastion of press freedom.

“If you’re someone who wants to leave Hong Kong because you’re troubled by the erosion of civil liberties like freedom of assembly, freedom of expression, and freedom of the press – why would you come to Singapore?” she asks.

On the 2021 World Press Freedom Index, Singapore ranks 160th out of 180 nations and territories – two spots down from its previous position at 158. The index classifies Singapore as “black” – the lowest possible category – alongside notoriously repressive countries like North Korea, China, Syria and Saudi Arabia. Hong Kong hovers at 80, down from 48th in 2009. Hong Kong’s status may be gradually declining, yet it’s still far from the black zone. 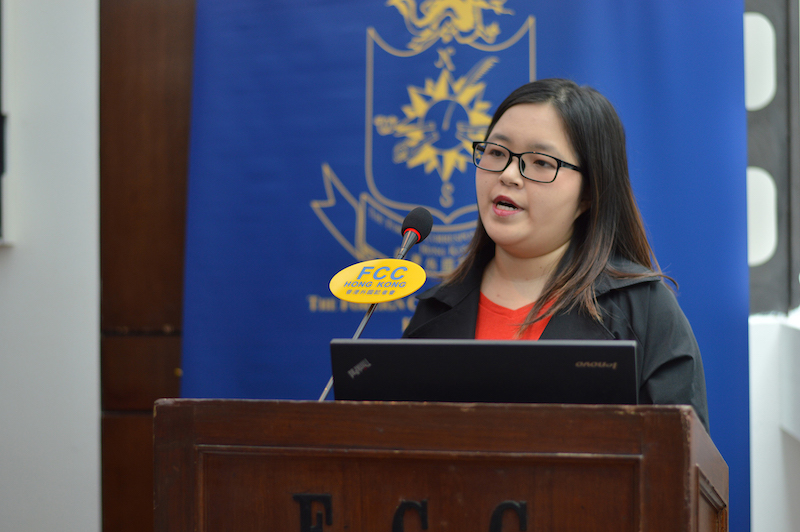 Freelance journalist and editor Kirsten Han spoke about press freedom in Singapore at the FCC in 2018. (Photo: Sarah Graham/FCC)

“Singapore wants to be a model for development, but it’s actually a counter-model for press freedom,” says Daniel Bastard, head of the APAC desk at Reporters Without Borders (RSF), alluding to the controversial Protection from Online Falsehoods and Manipulation Act (POFMA) introduced in May 2019.

The law affords the People’s Action Party (PAP) – Singapore’s ruling political party – the right to combat “fake news,” according to the official position. The Straits Times (ST), a pro-government paper with links to the PAP, recently defended the law as a necessity in a new COVID-19 reality where disinformation runs rampant.

While the law focuses on providing public corrections to alleged falsehoods,     it has also been used against local activists and the political opposition, which the government calls an “unfortunate coincidence”. Serious incidents can also be punished with hefty fines or even a prison sentence.

The law’s broad legislative wording, coupled with the enormous power wielded by the government, poses a threat to independent Singaporean media. Take the case of historian Dr Thum Ping Tjin, the founder and managing director of New Naratif, one of the few independent outlets in the country, as an example.

In 2020, the POFMA office issued a warning to Thum after he posted a video claiming that POFMA outlawed all government criticisms and effectively turned ministers into arbiters of truth. Given the legal consequences, Thum chose to post the necessary corrections while still challenging the law.

Then, of course, there are the “red lines that journalists should not cross, and if they do, it means very stressful lawsuits,” says Bastard. These are also called out-of-bounds markers (or “OB markers”) to indicate topics that aren’t suitable for open public discussion, like racism, LGBTQ issues, religion, or the finer points of government surveillance; OB markers are purposely kept vague.

He compares the system to China’s state media, albeit with a little more room for independent writers like Han. But those who incur the PAP’s wrath will likely face a team of government lawyers, which Bastard compares to a “David versus Goliath” fight.

A Singapore High Court judge ruled in February 2020 that, under POFMA charges, the burden of proof lies with the individual, who must prove the statement in question is true – not for the government to prove it is false.

That same month, in the case of The Online Citizen (TOC), another independent outlet, the court dismissed editor Terry Xu’s appeal against a correction order. TOC had published an article about supposed human rights infringements at Changi Prison, even though Xu pointed out that words like “allege” and “allegation” were used six times in the text. 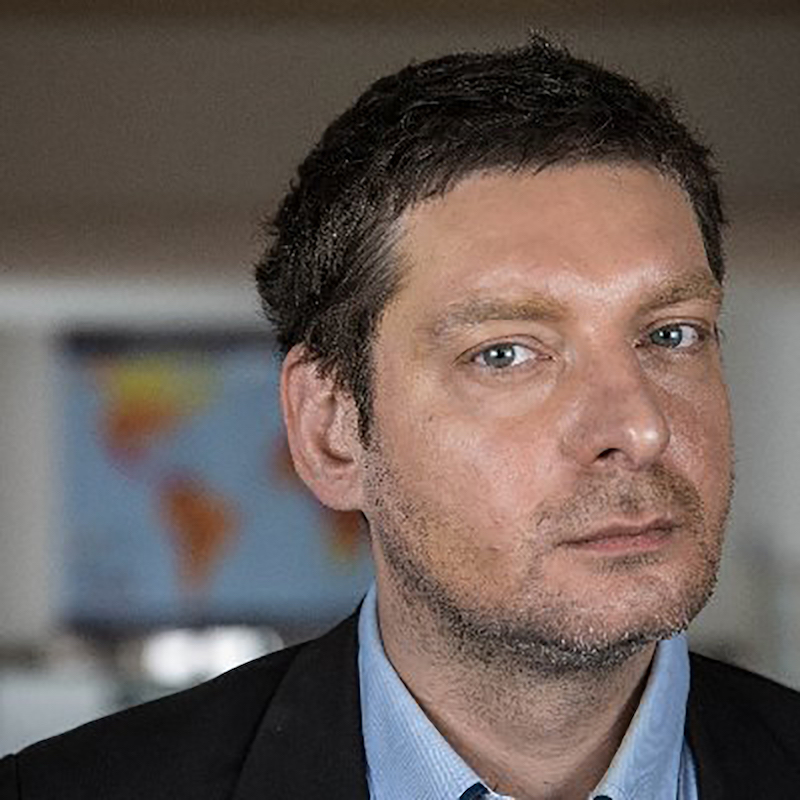 Daniel Bastard, head of the APAC desk at RSF.

Despite this, the government deemed TOC guilty of spreading misinformation. The appeals process can cost thousands of dollars, depending on how long the hearing takes. In Xu’s POFMA case, he claimed that his appeal would cost at least SG$10,000, or roughly HK$58,350.

In addition to POFMA, says Bastard, the Singapore government also exerts influence within news organisations. “I believe, still now, that the [Hong Kong] government doesn’t nominate the chief editors and directors of publications, as the government does in Singapore,” explains Bastard. “So in Hong Kong, you still have some editorial freedom or at least autonomy. That doesn’t really exist in Singapore at all.”

Han, who previously served as the editor-in-chief of New Naratif, says the ST is a case in point. It’s owned by Singapore Press Holdings (SPH), and the firm’s chairpersons are usually either PAP civil servants or closely involved with the party. The current editor-in-chief, Warren Fernandez, was almost nominated as a PAP candidate in 2006.

At the 2019 World News Congress in Glasgow, the World Editors Forum elected Fernandez as president. “I couldn’t believe it, but it dawned on me that people outside Singapore don’t understand the context of Fernandez being [chief editor] of ST – and how far from independent the paper is in Singapore,” she recalls.

In early May 2021, SPH announced a plan to restructure into a non-profit “limited by guarantee” company, to be chaired by ex-PAP minister Khaw Boon Wan. As reported by Today Online (another state-funded publication run by Mediacorp): “A company limited by guarantee is an entity that does not have share capital or shareholders but, instead, has members who act as guarantors of the company’s liabilities.” The changes will allow SPH (which is still primarily a real estate company) to diversify its funding, a move predicted by former ST Editor-in-Chief Patrick Daniel. 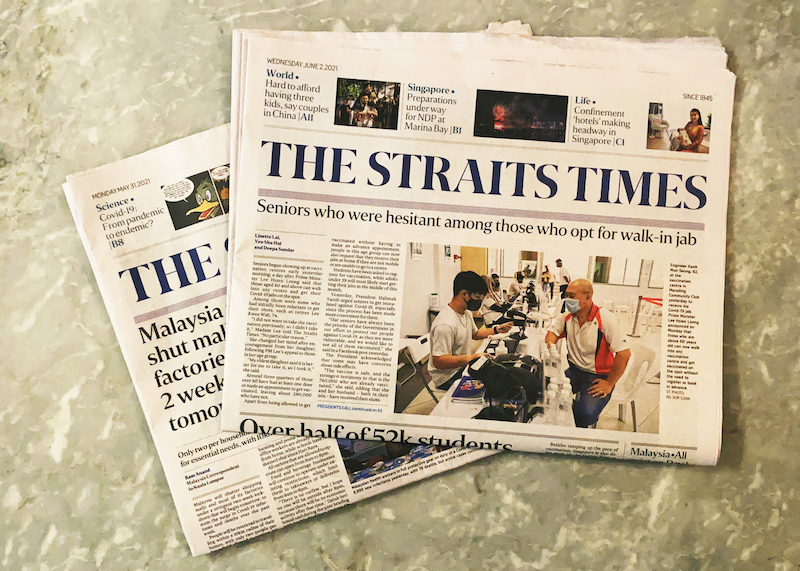 With strong links to the People’s Action Party, The Straits Times is emphatically pro-government.

While the shift to a non-profit model is welcome, concerned watchdogs and local opposition have also expressed concerns over Khaw’s appointment as a missed opportunity to create a more independent media environment.

According to academic Cherian George, Khaw’s new role is just another entry in SPH’s long history of appointing former politicians and civil servants with “no prior industry experience” into leadership positions. It also toes the line of the far-reaching 1974 Newspaper and Printing Presses Act (NPPA), which put ministers in control of publishing permits. The PAP views the NPPA as a necessity for “moral policing” and social harmony, and to hold publishers accountable for their content.

But it’s clear that as social media becomes an increasingly powerful way for people to communicate, old methods of censorship and content regulation are quickly becoming obsolete.

RSF works with the UN Human Rights Council (UNHRC) to evaluate Singapore for its Universal Periodic Review. According to Bastard, Singapore has accepted 117 past recommendations from the UNHRC – not a single one related to press freedom. “It’s never good for states to be criticised over human rights, even if the PAP government obviously doesn’t care about press freedom,” he says.

But despite POFMA and the censorious climate it creates, the 2020 election showed that young, politically engaged Singaporeans are driving meaningful conversations around historically sensitive topics, such as race, class and independent media.

“Young Singaporeans have been doing great at normalising certain discussions… and setting new expectations for our political and public discourse,” says Han. “In the long-term, [this] will make a big difference to Singapore.” 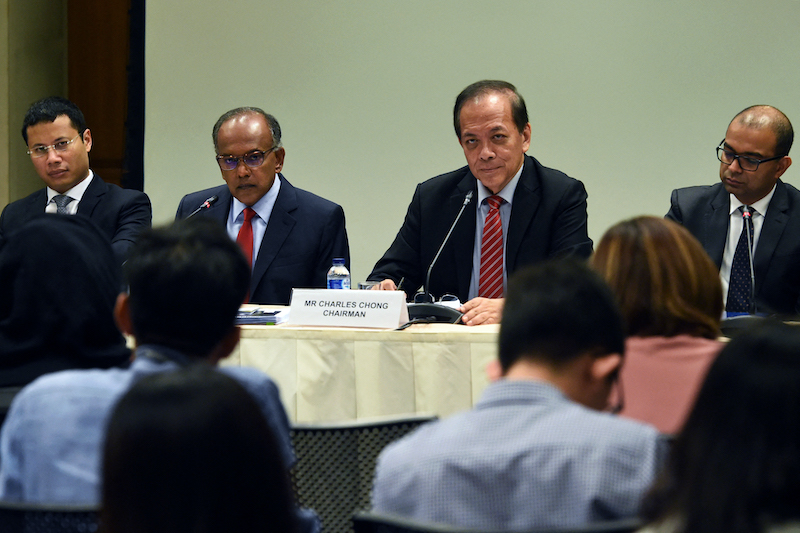 Charles Chong (right), deputy speaker of the parliament and chairman of the Select Committee on Deliberate Online Falsehoods, attend a press conference in Singapore on 20 September 2018. (Photo: Roslan Rahman/AFP)

For those seeking an alternative homebase in Asia, RSF’s Daniel Bastard suggests:

Although Taiwanese media needs legislative reform to strengthen its independence, the government hasn’t taken concrete steps to address that yet, RSF reports.

“Taiwan is definitely the regional model for press freedom,” says Bastard. “Though the media is quite polarised, there are good legal guarantees.”

South Korea still follows a system where public broadcast managers are appointed by the government, however, it is better than many countries in Asia.

“South Korea would be a second possible homebase, with president Moon [Jae-in] being quite protective with press freedom,” says Bastard.

“Things can change drastically with another government, though; the situation was quite bad under president Park [Geun-hye].” 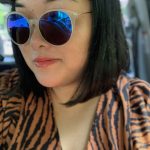 Alexis Ong is a freelance culture journalist based in Singapore. Her favourite beats are emerging tech, video games, and internet culture.