The Foreign Correspondents’ Club, Hong Kong, is firmly opposed to a restrictive new accreditation policy for journalists in the city as detailed in a 22 Sept. letter from the Hong Kong Police. This move is another step in the erosion of Hong Kong’s once cherished press freedom as it would give the police — rather than reporters and editors — the power to determine who covers the police.
The changes are not referred to as an accreditation system, but rather a redefinition of who is a journalist in the Police General Orders with the aim of “allowing frontline officers to efficiently and swiftly verify the identity of media representatives.” The letter says the police force will “amend the definition of ‘media representatives’ under the Police General Orders.” Yet the practical impact is the same as accreditation or licensing.
The new rule says police will only recognise as media those who have registered with the Government News and Media Information Service, or members of “internationally recognised and reputable” foreign media outlets.  The goal, according to police spokesmen, is to weed out so-called “fake reporters,” who they claim — without offering evidence — have obstructed police operations and even assaulted police officers on duty.
The FCC stands firmly against the system detailed in the Hong Kong Police Force’s letter for the following reasons:
* It undercuts the local journalist organisations whose membership cards have been routinely recognised and respected, the Hong Kong Journalists’ Association and the Hong Kong Press Photographers Association. These organisations conduct rigorous vetting of candidates before issuing membership cards, and this move by the police would take the power to determine who is a legitimate journalist out of the hands of journalists’ groups and place it in the hands of a government entity. That in itself is a serious erosion of press freedom and independence.

* The new scheme would give police officers the power to decide what foreign media outlets are “internationally recognised and reputable.” How would that be determined? With the proliferation of new media outlets around the world, how can the police on the ground determine which ones are “internationally recognised” and deserving to be treated as legitimate?  What about media that do not publish or broadcast in English, or that are not widely known outside of their home countries or immediate regions — are they not to be considered real journalists?

* The policy would be a serious blow for freelancers and student reporters — two groups of journalists who have provided some of the most compelling reporting from last year’s protests and police actions. Many journalists now operate as freelancers, some working regularly for specific organisations, and many others offering their stories and videos to multiple outlets “on spec”.  News outlets have come to rely on freelancers due to the changing economics of the industry.  But most of them cannot obtain registration because of their freelance status.

Student journalists, likewise, have been integral to the reporting on — and public understanding of — last year’s protest movement.  Student reporters have faced the same dangers as veteran journalists, and some have been injured.

But this is about more than access to events and invitations to the inside of the police cordon. Journalists who are not recognised under this new policy could face the real possibility of arrest for unlawful assembly or rioting.

Before this new policy, Hong Kong had already dropped to an ignominious 80th place on the Reporters Without Borders annual press freedom index of 180 countries, down from 48th place in 2009.  And that was before the 10 August police raid on the headquarters of Apple Daily and the arrest of its founder, Jimmy Lai.

The Hong Kong police in their letter say they “always respect press freedom and their rights of journalists.” If that is the case, they should welcome free and unfettered access to their operations, and should encourage open reporting instead of trying to restrict the number of journalists covering its operations. A force that is proud of its discipline and confident its officers follow established protocols and guidelines should have nothing to fear from the spotlight journalists shine on it. 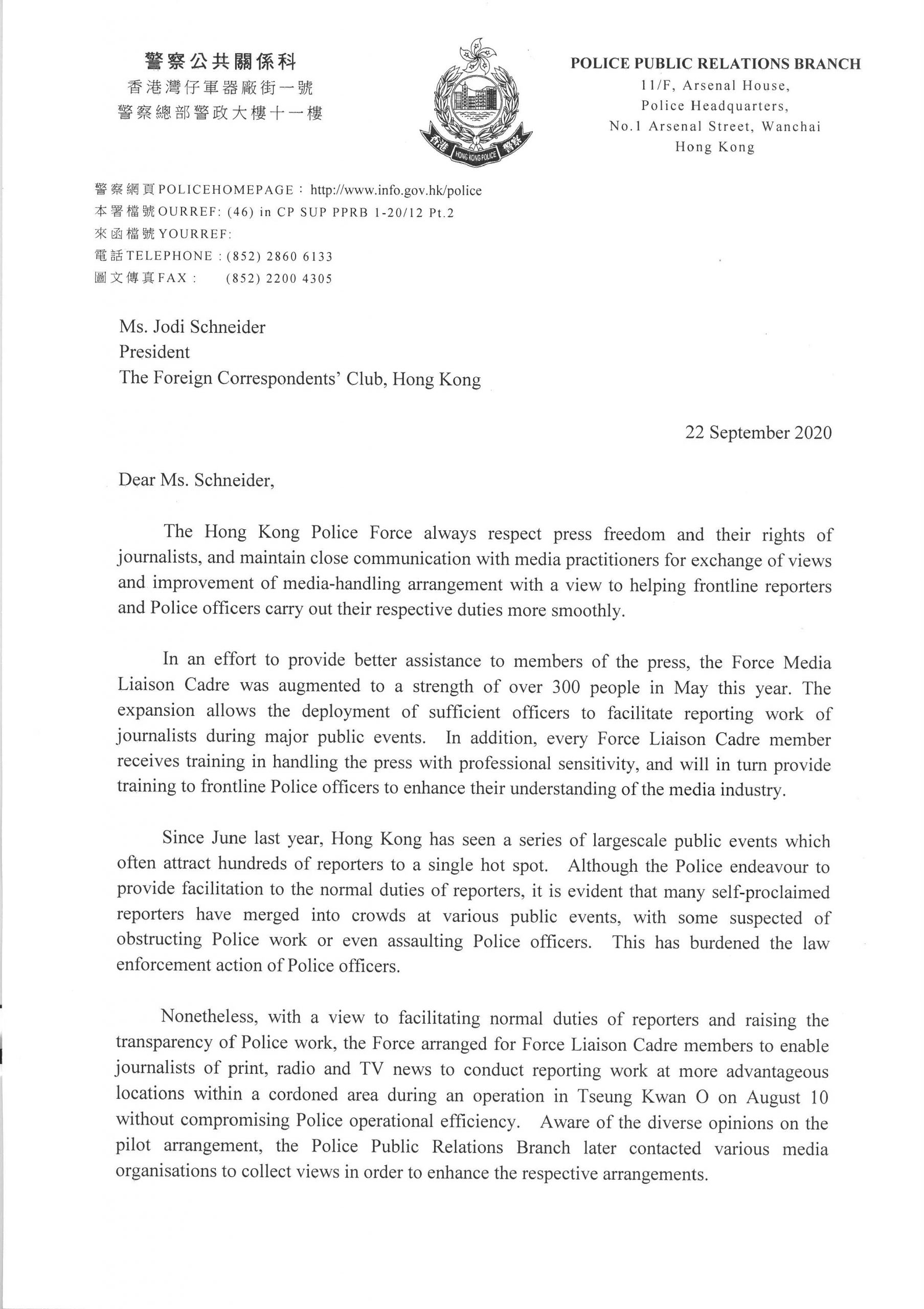 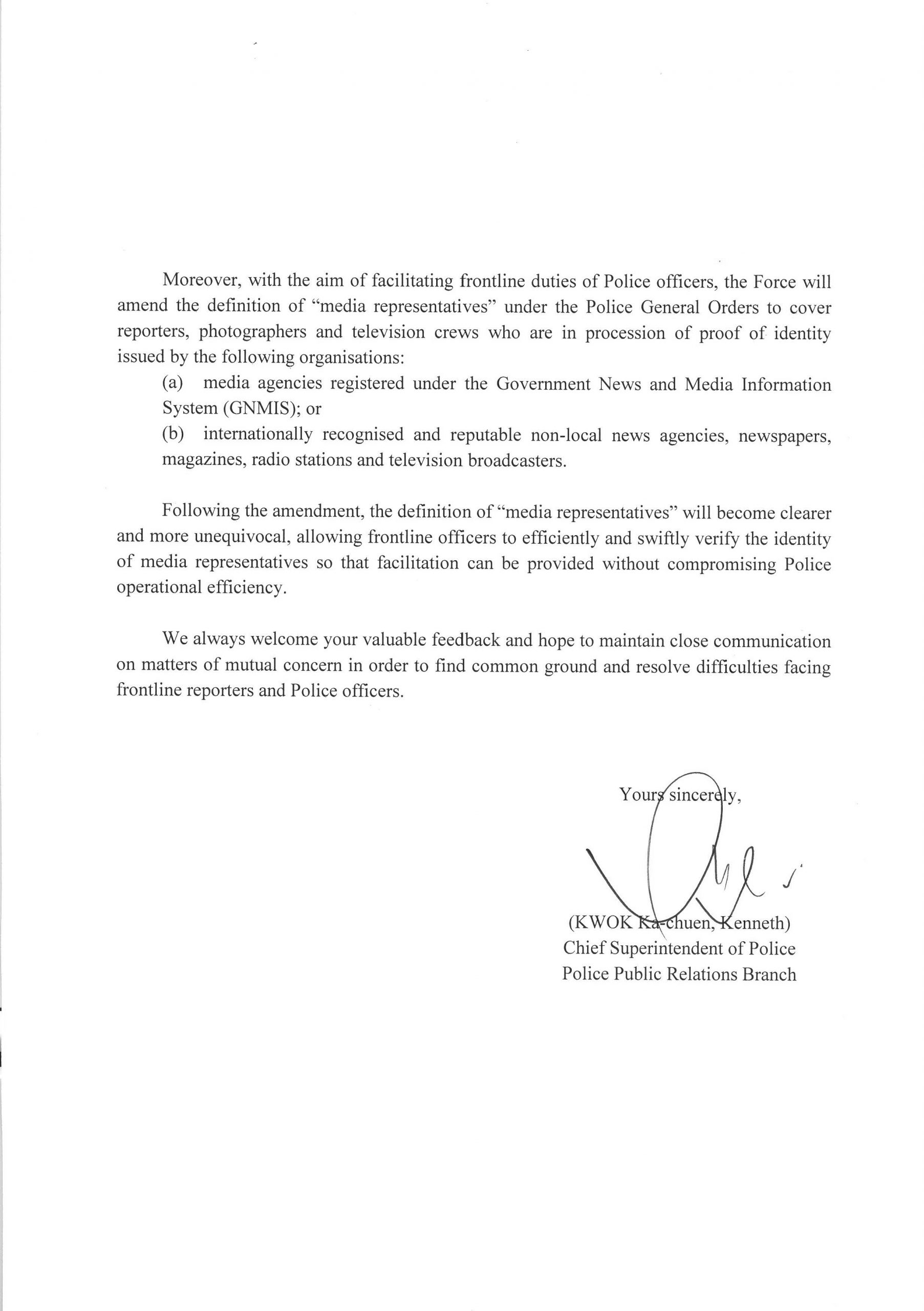