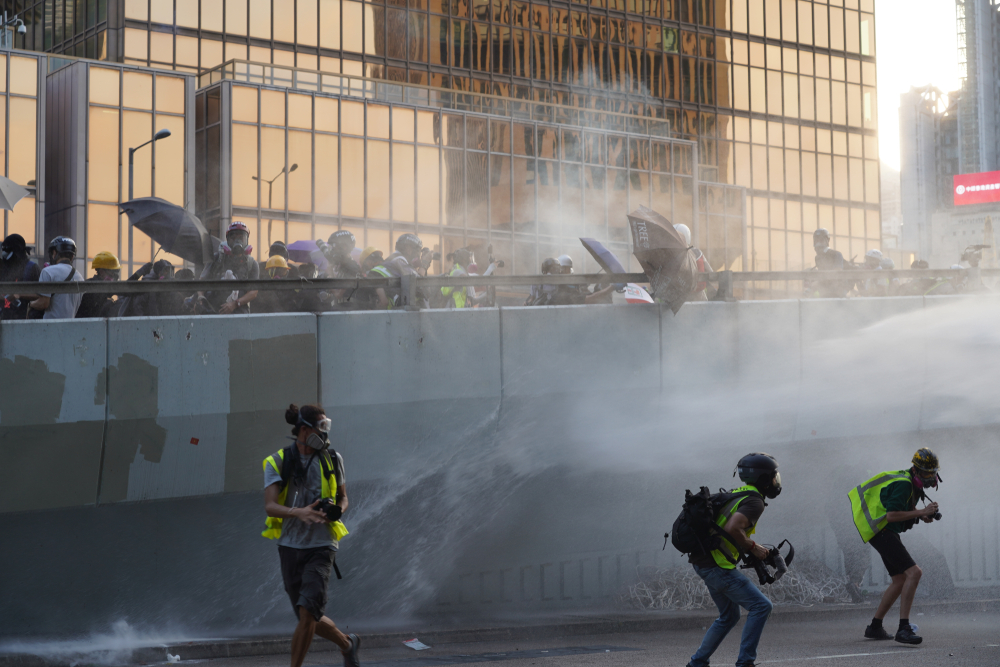 This op-ed on press freedom in Hong Kong, written by the club’s president, Jodi Schneider, will appear in the print edition of the LA Times on December 20. It is available to view on the LA Times website here.

Two deaths. Hundreds injured. More than 10,000 rounds of tear gas and half as many rubber bullets fired. More than six months of unrest. People and businesses are leaving Hong Kong as anti-government protests disrupt a city long praised for efficiency, ease of doing business and its retention of basic freedoms — including press freedom — that are nonexistent across the border in mainland China.

Amplifying this city’s deep-seated tensions is a surge of conspiracy theories and disinformation, which fuel the escalating violence. Public trust in the semiautonomous Chinese territory’s leaders, police and public institutions has been ruptured possibly beyond repair — as shown by the record-high turnout of voters in recent local elections supporting pro-democracy candidates. The vote was widely considered a referendum on the government’s handling of the protests.

Journalists have often worked under enormous pressure and in difficult conditions to cover these rapidly unfolding events. Yet rather than being respected as impartial witnesses attempting to bring light to facts, reporters have found themselves under attack while covering the protests and the police response.

The media have become part of the story as Hong Kong’s once-vaunted press freedom has been severely impaired.

The Foreign Correspondents’ Club of Hong Kong has sought to keep track of multiple incidents in recent months in which reporters were injured or obstructed by police while covering the unrest.

Veby Mega Indah, a reporter for an Indonesian-language newspaper, lost sight in one eye after police shot her in the face with a rubber bullet while she was covering a protest. Police forced May James, a prominent photojournalist, to remove a gas mask and jailed her overnight after she did not show her local ID — to a policeman whose identity was obscured. A driver working for Hong Kong’s largest pay-TV operator was hit by a police projectile, detained and left with a broken jaw after being beaten by police. A journalist with the online site Stand News has been diagnosed with a skin condition that has been linked to tear gas.

Tear gas is often fired close to — or directly at — journalists. Press access was restricted at a major university where protesters were in a standoff with police. And police have taken to deliberately shining flashlights and flashing strobe lights at journalists to obstruct them from taking pictures and video.

The attacks on the press have occurred even though journalists are clearly identified. They wear helmets and bright yellow vests emblazoned with “PRESS” and present press identification to police officers.

These events, many of them documented via video or livestreamed, have made it clear that journalists — including student reporters — are being targeted. There have been too many instances for them to be accidental or coincidence. It appears that a deliberate effort is being made to prevent independent reporting of events, and police in Hong Kong increasingly do not want their actions seen or recorded.

Amid the escalating violence, the Foreign Correspondents’ Club has been trying to help journalists in the city, including local reporters and foreign correspondents. My fellow club members and I held a series of practical workshops on things that most journalists in Hong Kong probably have not encountered — how to use milk or a saline solution to douse their eyes after being exposed to tear gas or wash away the blue dye used to identify protesters, how to resist unlawful police demands and how to secure a digital footprint so sources won’t be compromised. Videos of the workshop series have been made available online.

Board members of the correspondents’ club met with Hong Kong police officials to discuss how to improve press-police relations. Our recommendations included making sure police officers are easily identifiable and asking police to refrain from shining lights directly at news photographers and camera operators.

The protests present unprecedented challenges to the Hong Kong media, which have not faced this level of violence since communist-led protests against British colonial rule in the 1960s. The media are simply trying to do their job, which they have a right to do under Hong Kong law.

The United Nations provides a framework for maintaining good relations between the police and the press, which says the public has a right to observe and examine police actions. Journalists are the public’s witnesses. The police have a duty to maintain public order, yet also to be subject to public scrutiny. They should expect the media to take photographs and video, and not interfere with reporting. Security forces have neither the authority nor the legitimacy to impose limits on freedom of the press, according to U.N. protocols.

As U.N. Secretary-General Antonio Guterres said this year in defense of the world’s press: “Informing is not a crime.”

Hong Kong press freedom has been additionally challenged in recent years since more outlets have been bought by media owners with ties to mainland China, where the press is heavily censored and controlled by the Chinese government. Still, most foreign and local media outlets maintain their independence. Historically, they have helped keep public authorities and business figures accountable without fear for their safety or interference by authorities.

If that spirit slips away in Hong Kong, it could embolden other authoritarian-minded governments and world leaders to discredit the crucial role the press plays in societies around the world. The increasing danger facing journalists here is a threat to press freedom everywhere.

Jodi Schneider is president of the Foreign Correspondents’ Club of Hong Kong.