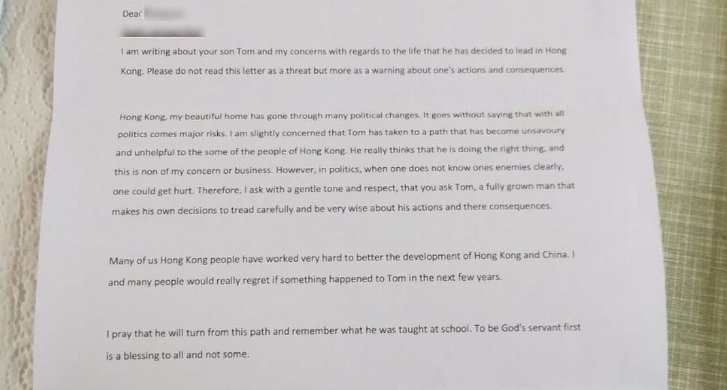 The Hong Kong Journalists Association is appalled at the threat mails received by the Hong Kong Free Press (HKFP) over the weeks. We call on the police to investigate it with its best endeavour. Journalists should be allowed to work without fear.

An excerpt from a letter sent to the family of Hong Kong Free Press editor-in-chief, Tom Grundy. Photo: HKFP

The intimidation is real not only because the threat to harm but also the delivery of the letters to the home address of two journalists, namely HKFP’s Editor in Chief Tom Grundy and commentator Tim Hamlett as well as that of Mr Grundy’s family in UK.

The letters warned two and their team from “spreading hatred and dividing Hong Kong, China society”.

The one sent to Mr Grundy’s family said: “In politics, when one does not know ones enemies clearly, one could get hurt… I and many people would really regret if something happen to Tom in the next few years.”

These have gone beyond disagreement of a media’s editorial line and should not be tolerated in Hong Kong where press freedom is promised by the Basic Law. We understood the journalists have reported the threats to the police. The authorities should ensure their safety with their best effort.