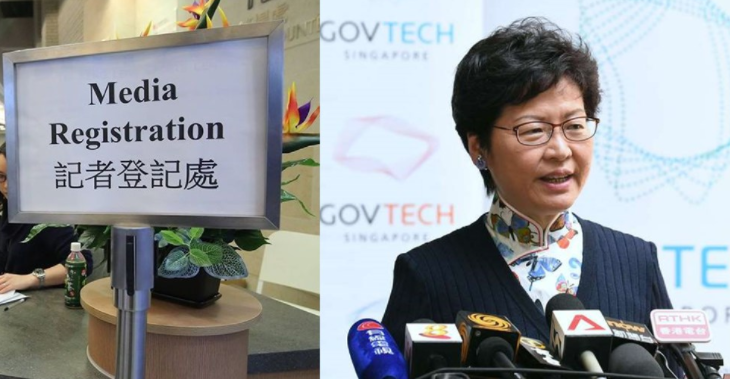 The government’s u-turn comes almost a year after the city’s Ombudsman ruled in favour of allowing digital media outlets to attend such events, and follows intense pressure on the Hong Kong government from local and international media watchdogs.

“We welcome the government’s long overdue decision to lift its bar of digital only media from its press functions. We will monitor the implementation of its accreditation policy to ensure all media are fairly treated. The result of the implementation will decide whether the Association will continue with the judicial review against the government’s online media policy. We call on the government to make corresponding adjustments to its press venues and functions to accommodate the expected increase in journalists,” a spokesperson said.

The FCC issued a statement saying it has long supported the demand by HKJA and all Hong Kong online-only media that they be treated equally to other “traditional” media. “The FCC shares the relief and satisfaction of all online media and salutes the government for this fair decision.”

Digital-only outlets will need to apply for registration with the Information Services Department (ISD) and meet the following criteria:

(i) It can provide proof of regular online news reports in the past three months immediately preceding the application;

(ii) It has been updating its news platform at least five days a week;

(iii) It is staffed by at least an editor and a reporter; and

(iv) It is registered under the Registration of Local Newspapers Ordinance (Cap. 268).

The ISD said it will review the arrangement after six months.

However, IT lawmaker Charles Mok cast doubt on the reliability of the accreditation rules, issuing a statement claiming that requiring digital outlets to register for accreditation under the Registration of Local Newspapers Ordinance was outdated.

1.  According to the four requirements issued by the ISD, online media is obliged to register under the Registration of Local Newspapers Ordinance (Cap. 268). However, certain requirements in the Ordinance have failed to keep up with the Internet development and therefore may pose challenges to online media of smaller scale.
2.  ISD should issue clearer definition on the ‘originality’ of the news content and ‘misconduct’ of the representatives of the online media as stated in the guideline. Appeal mechanism should be established for the evaluation of the criteria to be conducted in an objective manner.
3.  The government should review the requirements stated in the Registration of Local Newspapers Ordinance (Cap. 268) to cater for the mode of operations of online media.
Article 27 of the Basic Law states that Hong Kong people enjoy the freedom of the press and of publication. Mr Mok urges the government to consult online media organisations for feedback, and refer to the practices of LegCo in issuing passes to online media. Restrictions that would hamper freedom of online media should be minimised.”
Mok’s concerns were later echoed by Grundy, who added: “In order to access government press conferences and press releases, we will need to register as a ‘printed newspaper’. We’ll need to submit personal details for the editor/printer/proprietor and deliver daily ‘copies’ of our newspaper to the Chief Executive-appointed Registrar. Anyone reading the related Ordinance can see it is an outdated relic in dire need of an update. I hope this will not be a barrier to our news outlet being properly recognised.”
We measure site performance with cookies to improve performance.