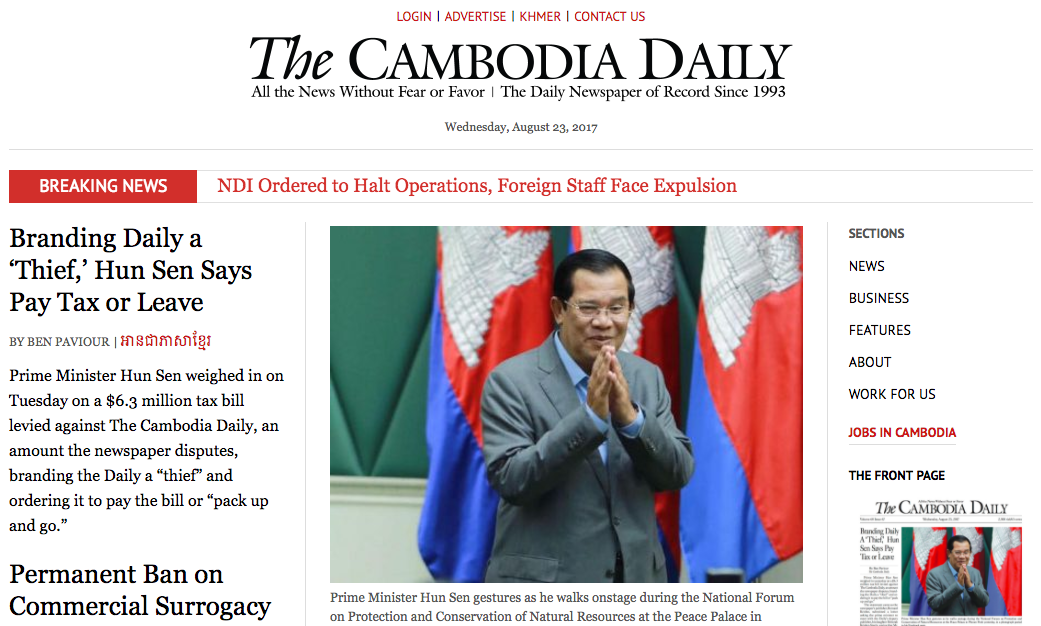 The OPCC is disturbed by the levelling, by the Cambodian Government, of a huge tax bill on the Cambodia Daily – a newspaper published since 1993.

The $6.3 million bill, calculated by the Tax Department, will force the paper to close if they do not pay by Sept. 4.

Due process has not been followed:

• The Cambodia Daily has not been allowed an opportunity to appeal or negotiate
• The Tax Department’s correspondence was leaked to government-friendly media which made it difficult for the newspaper’s management to deal with the issue
• The Tax Department calculated the bill in its own audit without referring to the Cambodia Daily’s books that the paper made available.

The Cambodia Daily’s bill is part of an effort by the government to call the country’s media organisations and NGOs to account for back taxes.

The Cambodia Daily has a history of running stories that have angered the government leading many to believe the tax department is being used to target critics ahead of the 2018 general elections.

The Cambodian people have enjoyed a free press for much of Hun Sen’s 32 years as prime minister. Even as neighbouring countries in Southeast Asia were consistently ranked at the bottom of press freedom lists.

The OPCC asks the government of Cambodia to consider this fact carefully and proceed with transparency, fairness and due process.

Furthermore, the Cambodia Daily has employed many journalists – local and foreign – for many years who have built careers and raised families in Cambodia. Their future and livelihoods are now at stake and we urge that be taken into consideration by the relevant officials.