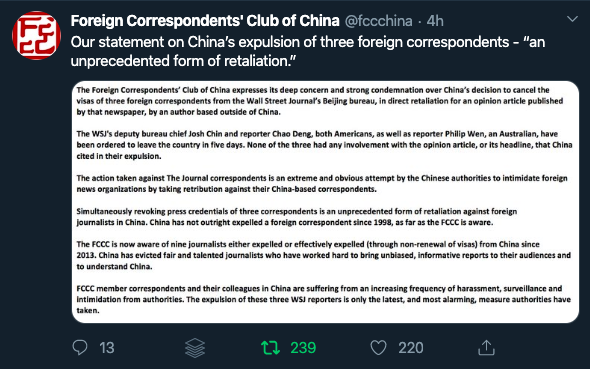 The Foreign Correspondents’ Club of China expresses its deep concern and strong condemnation over China’s decision to cancel the visas of three foreign correspondents from the Wall Street Journal’s Beijing bureau, in direct retaliation for an opinion article published by that newspaper, by an author based outside of China.

The WSJ’s deputy bureau chief Josh Chin and reporter Chao Deng, both Americans, as well as reporter Philip Wen, an Australian, have been ordered to leave the country in five days. None of the three had any involvement with the opinion article, or its headline, that China cited in their expulsion.

The action taken against The Journal correspondents is an extreme and obvious attempt by the Chinese authorities to intimidate foreign news organizations by taking retribution against their China-based correspondents.

Simultaneously revoking press credentials of three correspondents is an unprecedented form of retaliation against foreign journalists in China. China has not outright expelled a foreign correspondent since 1998, as far as the FCCC is aware.

The FCCC is now aware of nine journalists either expelled or effectively expelled (through non-renewal of visas) from China since 2013. China has evicted fair and talented journalists who have worked hard to bring unbiased, informative reports to their audiences and to understand China.

FCCC member correspondents and their colleagues in China are suffering from an increasing frequency of harassment, surveillance and intimidation from authorities. The expulsion of these three WSJ reporters is only the latest, and most alarming, measure authorities have taken.